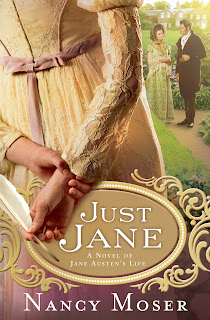 Relentless interest and research on Jane Austen and Tom Lefroy produced many things this year: Becoming Jane the movie and many BJ-related sites (including this one). Also, an interesting novel on Jane and Tom published on last Sept 1, 2007.

Just Jane: A Novel of Jane Austen’s Life is written by Nancy Moser, and now available at Amazon.com. I’ve ordered it, interested in the excerpt and the premise, although the writing and diction are not Regencial/Georgian. Hence, some of you (wink to a dear friend) might be put off by these 21st century lines:

“Beautiful,” he whispered as his shoulder skimmed mine.

“Rascal,” was my reply next pass.

“Determined.” He offered a wink.

And we can guess to which couple those lines belonged.

Just Jane also reminds me of Parson Austen’s Daughter by Helen Ashton (1968). A novel based on historical facts… but beware that the conversations were unlikely to take place verbatim, except if they were quotes from Jane’s letters (and other letters, for that matter).

In any case, I’m all excitement! Have ordered it from Amazon, and counting on any miracles, one of the Busy Bees of Team Jane will be here to give a short review later.

I just picked up a copy of the book yesterday from the bookstore where I work, and am already about twenty pages in! I'm really enjoying it so far, and there's immediate gratification in that Tom is mentioned very, very early, and is being discussed quite seriously as I'm progressing. Hope you get it soon!

Meg, I forgot you work in a bookstore... so if you come across any other interesting books on JA (or JA AND TL!), do let us know? We would love to have this blog as a living blog, and not fading away 'just' because the BJ movie is not in major cinemas in the US anymore (or is it still, Kari? Based on the Mojo?)

Absolutely will do, Icha -- I'm always looking for JA and TL items / books / stories, and constantly checking for a DVD release date for BJ in the U.S.! No word yet, but I'm hoping closer to Christmas some word will come out. I'll definitely keep you posted!

Readergirl, welcome and thanks a lot for your interest. And yes, one of our friends (James Kwak) has informed us about the DVD, so it's a good news, eh? I just hope that it will be a bit different with the UK version, for I wanna collect both of them.

Thanks! :) Exallent news! I've been waiting forever! XD Oh that sounds fun! do you think it will be? :)