Me and Mr Darcy by Alexandra Potter 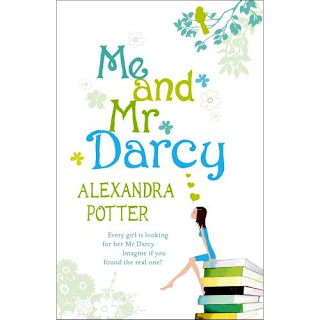 To bring us back down to planet earth after the last post, I thought that I would write a short piece about a book that I read when I was in Ghana. A friend recommended it to me because of my obvious love of Jane Austen and Pride and Prejudice.
If you want a book which is so light-hearted and easy-reading that it allows you to escape from the pressures of everyday life, then this is the book for you.

I think it appeals to every woman alive because come on every woman wants their own Mr Darcy.
The book is called ‘Me and Mr Darcy’ and is about an American bookshop owner named Emily, (a very quaint bookshop, like in the film ‘You’ve Got Mail’- does anyone know what I mean? I have always wanted to own a similar bookshop!), who is in her early thirties and single and who gets the offer to go to Mexico with her somewhat crazy friend to drink and party for New Year. She does not want to go and instead prefers to spend time alone with her favourite Jane Austen novel and her slippers (sound familiar? It does to me!). She, rather impulsively, decides to be adventurous and book a place on a guided tour through Jane Austen country instead.

When she arrives the entire tour consists of people over the age of 65, much to her dismay. There is one man her age who is a journalist and who she instantly hates for his arrogance and male pride. On the first day of the tour they visit Chawton to see where Jane lived in the last years of her life. When separated from the rest of the group, Emily stumbles across the real Mr Darcy. From that moment on, the rest of the week becomes quite an experience for Emily, something she will not forget.

As you can see from the premise, it is not serious at all and at times is rather silly but I really liked it. It does refer to the story of Pride and Prejudice a little too closely but sometimes I think it is important to read a book that allows you to swoon in the clouds. I really would recommend it; it is funny and the story telling is great and you just want to carry on reading, captured in the fantasy.
Pic: Taken from www.amazon.co.uk

But I don't wanna my Mr. Darcy. I want my James McAvoy Tom Lefroy with happy ending this time :-D

Greedy girl, I am.

i've read the book -- it was fun, almost predictable at the end, but very cute. i would recommend for a lazy weekend of darcy day dreaming!