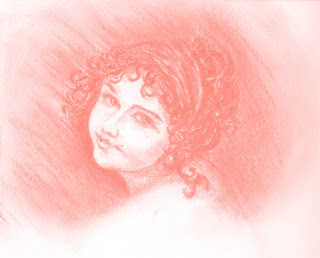 It is the truth universally acknowledged that was the most famous of the Bennet sisters. But apparently, her fame made one of her sisters restless. Lydia Bennet, the youngest sister with ‘high animal spirits, and a sort of natural self-consequence’ was about to write her own story and see if hers will beat Lizzy’s Pride & Prejudice!

Or at least, asked Jane Odiwe’s help to write her own story. As a writer, I understand what it means to have a character keep poking her/his head on my door, begging with puppy eyes to be written, dancing on my head until I grumpily open my laptop and write about her/him. Hence, I chuckled as I read Jane’s words as she started Lydia’s Story – a Jane Austen Sequel.

’s Story is a book I thought could not be written. Who, after all, could like a girl who is badly behaved, who has little regard for propriety and who is described as being vain, ignorant, idle and uncontrolled? I confess I was intrigued by her character and her story, though I resisted putting my ideas down on paper for some time. But refused to go away and so did the questions I wanted answering. Why and how did she and Mr. Wickham actually get together? We know they must have been thrown together in but I wanted to know the details, especially as it seemed they did not take much notice of one another in Meryton, or so I thought until I started to write the book!

Heheheh! Persistent ! What can a lady like Jane Odiwe do then, but to write about her? And the good news is: the book will be available before Christmas! Yipppeee! Jane informed me that Lydia Bennet's Story starts just before she goes to (and then went wild with Wickham there). To promote her book, Jane also created a blog called Jane Austen Sequels, of which journal starts right at the beginning of Pride & Prejudice. The book tells her story with added journal entries alongside. Well, well… can’t wait to read the book! I might be busy by then, but Rachel will definitely be on board already, and can give a preview for us all.

Jane Odiwe also gave another excellent news: sixteen of her Jane Austen illustrations will used in a documentary feature on the DVD of the Jane Austen Book Club. Well, well, well, I have not watched JA Book Club yet, though I really want to. Kari said that the movie was splendid, and I’ve begged her to write a review for us about it. Will be grand to buy the DVD and find Jane’s sketches there as well!

More excellent news: Kari is leaving to the Netherland tomorrow for her own stuffs… and to tie the loose ends of the Radovici mission (i.e. to reprint Radovici’s A Youthful Love). And unexpectedly, just a few days before her departure, we the Team Jane at the Becoming Jane Fansite were contacted by none other than Radovici’s daughter! Though I am very tempted to spoil more, I’m afraid I have to keep my mouth shut and wait for the good news from Kari and Veronica (Radovici’s daughter). Suffice to say that Veronica is very excited with our petition, and hopefully, fingers crossed, the petition will bear its fruits soon! Thanks so much for your helps and signatures, my dear friends, and let’s keep hoping for the best!