Due to the busyness of our everyday lives, we have not made a post for a while. We have not gone anywhere though and are still very dedicated to Jane and Tom and their story.

Kari has been busy though on her exciting travels to Amsterdam. We will report of her adventure shortly. Now though, I thought it was important to continue with information about Jane and what was very central to her life; her family. This short article is about her father.


The Austen background is somewhat interesting. A very enterprising young woman called Elizabeth Weller (George Austen’s grandmother) married wealthy John Austen in 1695 and started their family which led to seven children in nine years. In 1704 John Austen died young, leaving his wife with the seven young children and numerous debts. The family of John Austen did not honour their promises to help financially but Elizabeth was determined to educate her children (six were sons). She worked as a housekeeper in a schoolhouse in Sevenoaks and her payment was her son’s education. They consequently all gained solid education’s to enter the world of work and she also managed to organize a strong marriage for her daughter so Elizabeth could settle knowing that she had done her best for her children.


Elizabeth’s son William (George’s father, Jane’s grandfather) became a surgeon and married Rebecca Walter in 1727 in Kent. They had four children; the first girl died young, the second girl was named Philadelphia, the first son was George (Jane’s father) and the third girl named Leonora. Rebecca died giving birth to Leonora and William died shortly after in 1738. The children were now orphans so were separated and sent to live with various family members. George, now 7 (born in 1731) went to live with his father’s only sister, Aunt Elizabeth, and her husband in Tonbridge.

ollege at the University of Oxford with a fellowship. He won a scholarship in 1751 to study divinity. By the age of 24 he was back in Tonbridge working as a teacher before he was invited to become assistant chaplain back in Oxford. Here he met Cassandra Leigh and three years later, married her in April 1764 in Bath. In the meantime he had been offered the livings of Deane and Steventon. George was given one living by his uncle Francis who paid for his education and another by his distant cousin, Thomas Knight of Godmersham (who would later adopt his son Edward).


The young married couple began at the Deane parsonage but later, after repair was complete, settled at Steventon rectory to begin their family. Over the next fourteen years they had six sons and two daughters. To financially support this large family, Reverend Austen opened a boarding school for the local boys belonging to the parish. 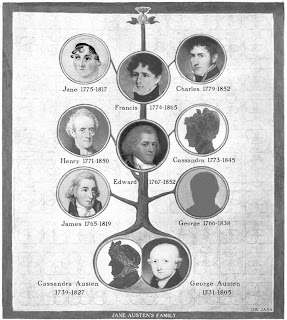 It is clear that George Austen promoted happiness within his family; there were regular sessions of family reading, games and music. He obviously recognized Jane’s potential when he sent a letter in November 1797 to the publishing firm Caddell and Davies with the view to making an arrangement to publish Pride and Prejudice. The letter was rejected but this act shows a faith in his daughter’s talent and potential as a female author.


It is assumed that George Austen was a handsome man. One account of his appearance was offered by Jane’s niece, Anna Lefroy, who wrote, “I have always understood that he was considered extremely handsome, and it was a beauty which stood by him all his life. At the time when I have the most perfect recollection of him he must have been hard upon seventy, but his hair in its milk-whiteness might have belonged to a much older man. It was very beautiful, with short curls about the ears. His eyes were not large, but of a peculiar and bright hazel. My aunt Jane's were something like them, but none of the children had precisely the same excepting my uncle Henry.” 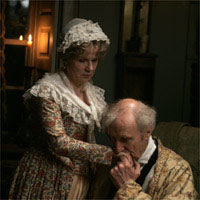 After a very happy marriage of 41 years, George Austen died on January 1st 1805 in Bath. On January 2nd, Jane wrote to her brother Frank about their father. She wrote: "We have lost an excellent Father. An illness of only eight and forty hours carried him off yesterday morning between ten and eleven. His tenderness as a father, who can do justice to?"

I think that this gives a clear impression to us as to what type of father George Austen was to his eight children.


Pics
1. George Austen from the painting port website
2. Silhouettes of George and Cassandra from the Pemberley Website
3. The immediate Austen family tree from The Jane Austen Society of Australia (which I hadnt spotted before but I love it!)
4. George Austen (played by James Cromwell) in Becoming Jane from Mirror newspaper article

OOoohhhhh!!! Lady Rachel, thank you so much! I'm so sad that I hardly have time recently to update the website; thank God I have you and the other ladies to help me!

And I'm too excited now for the latest communication we had just now with a very important person in Tom Lefroy's life! Cannot talk more... I have to learn to shut up and let Rachel do the do first.

God, so much to do, so little time!