He has inherited the mantle of brooding heart-throb from his friend Colin Firth. But Dominic Cooper's own tangled family drama exceeds anything Jane Austen could have imagined...

The evening before we meet, Dominic Cooper was having supper with Colin Firth.
The actors recently worked together in Greece on the movie Mamma Mia!, where they struck up a friendship of sorts.

Cooper says Firth is "someone I'd like to be like - a funny, charismatic person..."
He continues to list Firth's qualities, but I have to confess I don't quite catch all he says. 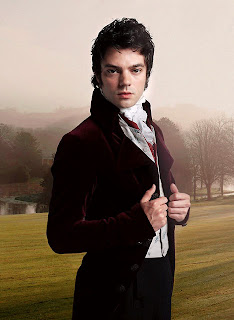 ... At 29, Cooper is part of a new generation of British actors, that includes James McAvoy, Ben Whishaw, Rebecca Hall, Emily Blunt and Hayley Atwell, making their mark in film and on stage.
He says that the thought of "filling someone else's shoes" as Willoughby - Greg Wise famously played him a decade ago, co-starring with his now wife Emma Thompson - was a challenge.
"Whenever I mentioned it to people they said: 'Oh Willoughby - nasty piece of work.' Then came the realisation that he was just a young man who made the wrong decision."
Indeed, this realisation is powerfully dramatised in the concluding part of Sense And Sensibility this weekend, leaving the viewer with a certain sympathy rather than absolute antipathy for Willoughby.
"His weakness is that he obeys his aunt," says Cooper.
"You have to remember the time and how, for girls, if you don't have money you're screwed. Marianne doesn't have money, which makes life very difficult for her.

"Willoughby doesn't have money, so needs his aunt's inheritance. That's why it's so desperate when he rejects Marianne.

"I do truly believe that he was absolutely in love with her, that he wanted to marry her and is about to ask her to marry him, but gets put in a very difficult position."

(29?! He looks more like 17 ...) Continue reading the (very interesting) article here at the Dailymail. Have fun!

Pic: Dominic Cooper as Willoughby from: The Dailymail

There is only one Darcy.

I just had to say that.

agreed. He looks too uncertain and slightly boyish +undefined nose