Jane Austen Quote of the week 227

I have used this quote before back in August 2008 but I thought it was particularly apt this special weekend of Easter.
From chapter 20 of Persuasion Anne is describing her experience of visiting Lyme which is also rather suitable because I am travelling near there this weekend.

The last few hours were certainly very painful," replied Anne; "but when pain is over, the remembrance of it often becomes a pleasure. One does not love a place the less for having suffered in it, unless it has been all suffering, nothing but suffering, which was by no means the case at Lyme. We were only in anxiety and distress during the last two hours, and previously there had been a great deal of enjoyment. So much novelty and beauty! I have travelled so little, that every fresh place would be interesting to me; but there is real beauty at Lyme; and in short," with a faint blush at some recollections, "altogether my impressions of the place are very agreeable."
uch negative feelings. 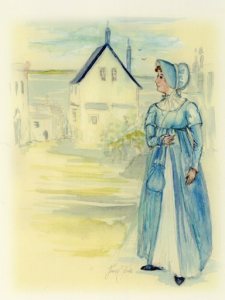 Tom Lefroy Quote of the Week 29

I recently stumbled across the following article and I simply had to pass it on to you.  The title is:  "Who was the real Thomas Lefroy?" written by one of his descendants.  Here is the first paragraph which explains what it is about:

As reported recently in the Longford Leader, the new film about the life of Jane Austen, "Becoming Jane", documents the famous author's relationship with Thomas Lefroy, who went on to purchase Carrigglas Manor. While the film concentrates on Austen, there is also much interest in Mr Lefroy's background and how he came to own Carrigglas. Here, in an article written by Lt Colonel Patrick Lefroy MA MBE, a descendent of Lefroy, for the 1983 Longford Historical Society Journal, we look at Lefroy, the man who was said to be the inspiration for Darcy- one of Austen's most famous characters.

You may read the rest of the article HERE.  What I really like about the article is that he seems to be of the same mind as I am about the Tom/Jane 'affair'.  Also, we get a rather detailed look at Tom's life.
Yrs aff'ly,
Linda the Librarian

Jane Austen Quote of the Week 226

Have you ever been agitated, vexed out because you sent a rather long letter (read: email, SMS), and yet received a very short reply instead? Well, I have, more than several occasions. Hence, I find it very amusing when this quote popped up from our BJF old archives. Thanks to Michelle (wherever you are now, M, take care...) for providing us with this quote back in 2009.


From Jane's letter to Cassandra, dated 24 December 1798 (click here for the Pemberley archive):

"You deserve a longer letter than this; but it is my unhappy fate seldom to treat people so well as they deserve."

So there you go. Whenever you receive a very short answer to your lengthy (traditional) letter, email, SMS etc, just remember this: Cassandra Austen had the same fate too! Although I wouldn't say that Jane's letter to her was short at all...

Jane Austen Quote of the Week 225

I was reading some of Jane Austen's letters to her niece Fanny Knight and the following quote grabbed my attention. It is taken from letter 84 written on 23 March 1817.

"Do not oblige him to read any more. Have mercy on him, tell him the truth, and make him an apology. He and I should not in the least agree, of course, in our ideas of novels and heroines. Pictures of perfection, as you know, make me sick and wicked; but there is some very good sense in what he says, and I particularly respect him for wishing to think well of all young ladies; it shows an amiable and a delicate mind."

This week I have come across some people who are 'pictures of perfection' and it has left me with that feeling that Jane Austen describes. I felt guilty but upon reading this it made me feel much better and more normal!

Jane Austen Quote of the Week 224

This past week I had a "light-bulb" moment after viewing the movie "Amazing Grace" about William Wilberforce's campaign against the British slave trade which was abolished in 1807.  I began to realize exactly what that "trade" was all about, and it wasn't 'pretty'.  This movie actually happened during Jane's life time and she knew of the writer Hannah More.
I was checking James Austen's periodical, "The Loiterer" that I put on line, for a quote and ran across this in Issue 23 subtitled "Vexations attending the pursuit, and possession of wealth, in a letter from Indicus.":

The Son of a Neighbour (very few years older than myself) about this time returned from the East-Indies, with one of those sudden fortunes, which never fail to draw upon their possessors the admiration of the Vulgar, the envy of the Weak, and the pity of the Wise. — As we had been formerly Schoolfellows, and our Families were still upon terms of great intimacy, I was one of the first who were invited to a magnificent Villa, he had just purchased, on the banks of the Thames, where one fortnight spent amidst the luxury of fashionable dissipation, and the blaze of Oriental Grandeur, completely turned my head, and determined me to waste no more time in this dirty Island, but to go at once to that Country, were riches were so easily to be acquired. It was to no purpose, my Friends attempted to oppose this resolution: it had so entirely taken possession of my mind, that it haunted my very Dreams. Sometimes I found myself carried in an elegant Palanquin, attended by a long train of Blacks; and at others inclined at my ease on a rich Sopha, while my careful Slaves drove away the Mosquitoes with their fans. I now settled the accounts with my Circars, now counted imaginary Lacks, and admired the lustre of ideal Diamonds.

My point being that James Austen used the terms "Blacks" and "Slaves".  So the Austens must have had some idea about that situation.  However, I am not at all sure what James means with the term "Lacks".
The movie left me in tears and consternation at the ignorance of us "Southerners" (in the U.S.) of the real circumstances of the People of Africa.  I am here to declare that slavery is wrong and evil.
The complete Issue No. 23 gives us a good example of what should and should NOT be done with wealth.  You may read it HERE.
Yrs aff'ly,
Linda the Librarian