The Inside Scoop on "The Kiss"

A very big thank you to Kari for unearthing this charming NY Times article, and to IMDB poster helloeeze who originally shared the article. This is one big "awwww" read (swoon-o-metre alert - so don't say I didn't warn you ;), and make sure you pop over to the NY Times and read the full article, it's gorgeous. It's so refreshing to read about McAvoy; so talented and yet so humble and unspoiled. 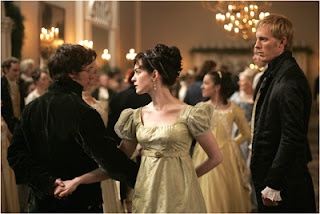 “James is not somebody who’s going to get his head turned,” the director Julian Jarrold said.
“He’s thoughtful about what he wants to do next.” Mr. Jarrold, who made “Becoming Jane,” said he had wanted to work with Mr. McAvoy again after directing him in a mini-series based on the Zadie Smith novel “White Teeth” five years ago. “It was quite a small role, but he shone out,” Mr. Jarrold said. “He’ll be around a long, long time.”
Mr. Jarrold praised Mr. McAvoy for bringing something extra to the party, an inspired flourish that bolsters a scene. “He gave me a lot of options,” Mr. Jarrold said. “And these were always in service of the story — not the things some stars suggest to make themselves look good.” 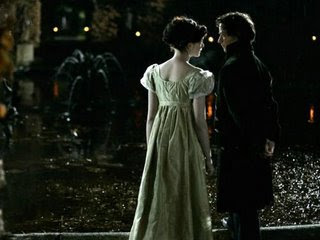 In “Becoming Jane,” there is a scene that both men call simply the Kiss.
The movie concerns a putative romance between a 20-year-old Jane Austen, played by Ms. Hathaway, and Mr. McAvoy’s character, a worldly Irish law student named Tom Lefroy. While there are other kisses in the movie — as you can only hope there were in Austen’s short life — this is the first.
The scene needs to pack a punch, and it does, not least because it’s she who kisses him, boldly and deliberately after weeks of wary distrust. But his response caps the moment: In one of those small, eloquent gestures that are a signature of Mr. McAvoy’s work, he draws back slightly, as if not daring to believe what just happened, and, seeing that she meant it, his eyes fill with amazed joy. A perfectly executed impulse — he did it on only one of the takes — it creates a second of tension that underscores each lover’s vulnerability and seals the scene in memory.
Not all Mr. McAvoy’s gestures are small. “Julian was the first guy who’d let me be funny if I wanted to be funny,” he said. “I didn’t like the script, I was afraid Lefroy would be too Darcy, and he said I could play with that image, and that interested me.”

James McAvoy is just what a young man ought to be... need I say more? Why oh why is he taken?! And WHY am I living in Sweden?! I feel I'm missing out! ;) I am utterly and completly infatuated.

/hugs and kisses from Maria

"Just what a young man ought to be" Oh, he is! He just seems like the "Perfect Man". Everything charming and unbelievably TALENTED. In film these days we are so bombarded by non-talents, James is even more of a revelation. And that accent, well ... swoon. (My family are Scottish, so I'm well conditioned to the accent, but there's something special about his ... naturally ;)

Maria, have you seen Atonement yet? Verdict?! James was the standout, along with Saiorse Rohan (sp?) I loooove the story; it's incredible, and, never been done before, I think. (McEwan's structure)

Have a fantastic day!

Michelle, no not yet. I have not had the time (since it opened today in sweden) hehe... But I will SOON! It has gotten great reviews here as well, but more focused on Keira than our lovely James... (all male writers i suppose...)

Here’s a wonderful quote about James made by Joe Wright on YouTube: "…and he just, you know, he's just so good you just can't help but love him and when he smiles, you smile and when he cries, you cry. It's something quite weird. I don't know what it is, and I can't define it, and I don't know if I want to define it…because it's just an idea, but he's, yeah…I've been aware of him a while."

Yeah, we all “think very highly of him”, but it’s very hard to define his charm. I am so glad that he was chosen to play Tom Lefroy in Becoming Jane. I can not imagine there is “such another man” to play this role, as I will never be able to like another Mr. Darcy than Colin Firth.

i so agree about James! *sigh*

i have to agree about james mcavoy's acting abilities. when i watched this movie, i could see pain in his eyes as if he was experiencing this firsthand. after this movie, i watched atonement and fell in love with that story and of his work. he is amazingly humble when interviewed and i think that's very rare nowadays. he also admits that he's a romantic at heart so it's probably why he picks love stories.

as for the kiss, i always wondered why he flinched in the movie. i didn't understand why they picked that take to use b/c i almost see it was a negative that he drew back. they didn't really show his facial reaction very well after the kiss and so the flinching, to me, felt misplaced. but with this explanation, i can see why it fits now.

great blog, i am infatuated with the story of jane & tom.

Welcome Ixaj to the blog and thanks for the comment. Its great to be reminded of the best moments of Becoming Jane and 'the kiss' is definitely one of them. Thanks again.....