If nothing else, Jane Austen wrote from personal experience. Courtship she knew well; only the last act eluded her. This film biography dramatizes Austen’s lost loves: Harris Bigg, whose proposal she accepted and then rejected; Edward Brydges, whom she also refused; the tongue-tied vicar she teased mercilessly; and the young surgeon who arrived on the scene too late to steal her heart. Olivia Williams (The Sixth Sense), Greta Schacchi (The Player) and Hugh Bonneville (Notting Hill) star. 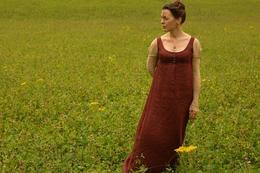 “The only way to get a man like Mr. Darcy is to make him up.”
THE COMPLETE JANE AUSTEN MISS AUSTEN REGRETS ON MASTERPIECE
Sunday, February 3, 2008 at 9pm ET on PBS
Of all the love stories filling the rich imagination of Jane Austen, one in particular did not end with wedding bells. Her own. Why did the author who embodied the brilliant wit and high spirits of her heroines not take the plunge into matrimony herself? 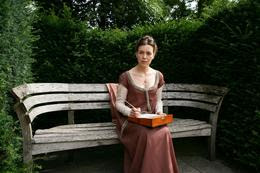 Therein lies a very poignant tale, as presented by MASTERPIECE in its bittersweet period drama, Miss Austen Regrets, airing Sunday, February 3, 2008 at 9pm ET on PBS (check local listings), as part of MASTERPIECE’s The Complete Jane Austen.
Olivia Williams (Sixth Sense, Rushmore) stars as Jane, approaching her fortieth birthday and long since at peace with being an unmarried woman—indeed enjoying its freedom and solitude to write. She has even developed a devoted readership that reaches as high as the Prince Regent, the future King George IV. 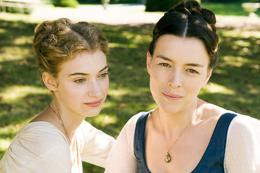 But like the title character of her latest book, Emma, Jane soon finds that it is emotionally perilous to get involved in someone else’s love life—not least because it kindles a certain romantic longing of one’s own.
Imogen Poots plays Fanny Austen-Knight, Jane’s marriageable young niece who looks up to Aunt Jane as smart, edgy, and a fount of wisdom on the merits of potential husbands. But Fanny’s importunate queries—and fate—bring Jane’s memories of lost loves flooding back.
Greta Scacchi (Daniel Deronda) plays Cassandra, Jane’s 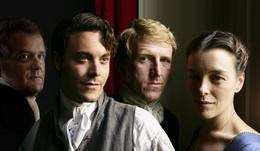 older sister and the confidante of her innermost thoughts.

Years earlier, it was Cassandra who persuaded Jane to rescind her acceptance of the marriage proposal by Harris Bigg (Samuel Roukin). The heir to a fortune, Bigg would have guaranteed the Austen family’s financial security, if not necessarily Jane’s happiness.
Hugh Bonneville (Iris) plays another former suitor, the Reverend Brook Bridges. Smitten with Jane as a young man, he could not pluck up the courage 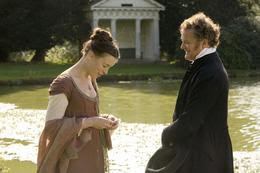 to ask her to marry him. Much later, when he finally did propose, Jane had given up on marrying anybody.
Prospect number three is dashing physician Charles Haden ( Jack Huston). As the drama unfolds, Jane summons him to treat her desperately ill brother Henry (Adrian Edmonson) and ends up in a flirting relationship with the much younger medical man.
Miss Austen Regrets was written by Gwyneth Hughes, who based her script on Austen’s surviving correspondence with Cassandra and Fanny. The characters and incidents in the film are drawn from these
letters, with Hughes reading carefully between the lines to fill in crucial gaps. 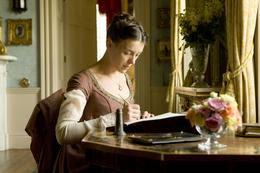 Cassandra notoriously burned many of her sister’s letters after Jane’s death—an act that was probably intended to spare the feelings of still-living relatives and acquaintances, who were the target of Jane’s famous barbs.

As for Jane’s barbs against her own headstrong resistance to a conventional life, these survived to leave a remarkable record of a mind of sense and sensibility, pride and prejudice, ceaselessly active in the real world of imperfect suitors and in the make-believe realm of true love fulfilled. 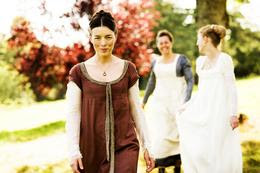 All images of Miss Austen Regrets from: PBS Pressroom

Has anyone else gotten a chance to see "Miss Austen Regrets"? I thought it was absolutely wonderful! Very well-acted, and I loved the fact that the film so effortlessly filled in the spaces left by the lack of Jane's letters from certain time periods, or so many other gaps we have in our knowledge of Jane. Like "Becoming Jane" (which comes out in the U.S. on TUESDAY, I'm soooooo excited!), I'm sure there are plenty of things we can't validate for sure as a type of "truth," but I loved it all the same. I hope everyone gets to see it, and that you ladies are well :)