Jane Austen Quote of the Week 248


I was looking for a quote about friendship just now when I was attracted to the bold quote below. I found it here; the expanded quote is from Pemberley. From Sense & Sensibility, Chapter 31, when my dear Colonel Brandon (the Alan Rickman version in my head) visited Elinor after Marianne received the horrible letter from Willoughby:

"I met Mrs. Jennings in Bond Street," said he, after the first salutation, "and she encouraged me to come on; and I was the more easily encouraged, because I thought it probable that I might find you alone, which I was very desirous of doing. My object -- my wish -- my sole wish in desiring it -- I hope, I believe it is -- is to be a means of giving comfort; -- no, I must not say comfort -- not present comfort -- but conviction, lasting conviction to your sister's mind. My regard for her, for yourself, for your mother -- will you allow me to prove it, by relating some circumstances, which nothing but a very sincere regard -- nothing but an earnest desire of being useful -- -. I think I am justified -- though where so many hours have been spent in convincing myself that I am right, is there not some reason to fear I may be wrong?" He stopped.

"I understand you," said Elinor. "You have something to tell me of Mr. Willoughby, that will open his character farther. Your telling it will be the greatest act of friendship that can be shewn Marianne. My gratitude will be insured immediately by any information tending to that end, and hers must be gained by it in time. Pray, pray let me hear it."


While we know it was the right thing for Brandon to disclose Willoughby's secrets, Brandon's words did leave me wondering. I hope I will remember it whenever I find myself trying so hard to prove that I'm right. I could be right, but who knows, I could be wrong too...

Jane Austen Quote of the Week 247

This week I was on an introductory teacher training course and it was really interesting. Lots was discussed, including the historical view that boys were first in line for an education.

I have chosen a quote from Chaper 1 of Mansfield Park:


“Give a girl an education and introduce her properly into the world, and ten to one but she has the means of settling well, without further expense to anybody. ” 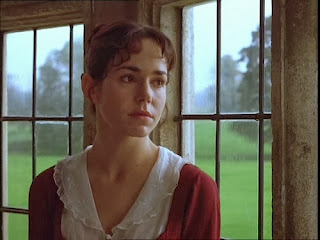 I hope you all have a wonderful weekend.

Jane Austen Quote of the Week 246 by Linda

For quite a while now I have been thinking about the subject of "families" particularly about how family members should treat each other.  So I checked to see if Jane Austen had anything to say on the subject.  Fortunately, I stumbled onto Lori Smith's blog and web site.  She also has a book I want to read titled "The Jane Austen Guide to Life".  Now that sounds interesting!

Family squabbling is the greatest evil of all...

The bottom line is that we should treat family members the same way we should treat everyone elso on earth - with kindness, respect, helpfulness and so on.  Well, that thought led me to go see what the Bible has to say on that subject and I landed at Galatians 6:1-2:
1.  Brethren, if a man be overtaken in a fault, ye which are spiritual, restore such an one in the spirit of meekness; considering thyself, lest thou also be tempted.
2.  Bear ye one another's burdens, and so fulfil the law of Christ.
And all that boils down to the old saying "Do unto others as you would have them do unto you."  Oh my goodness, I looked that one up in the Bible and found Luke 6:27-38.  Wow, I had quite forgotten all the 'ins and outs' to that simple "do unto others..." but those verses sure spell it all out.  Now, if only we all followed that advice, what a wonderful world it would be!  No wars, etc.!
As Jane would say, "I leave it for you to determine."  I am looking forward to your thoughts on this subject since it is so dear to my heart.
Yrs aff'ly,
Linda the Librarian

Tom Lefroy Quote of the Week 32

A few days ago I viewed the movie "P.S. I Love You" with one of my favorite actors, Gerard Butler.  He has a lovely Irish accent, oops, I just checked and his accent is Scottish.  Oh, well, I can't tell the difference at any rate.  Anyway part of the film is set in Ireland which of course makes me think of our dear Tom.
That film made me think of "Ireland" itself and just exactly why was Tom in that country.  Let me quote from the "Memoir of Chief Justice Lefroy" first.  This is from Chapter 1:
Thomas Langlois Lefroy was born on the 8th of January, 1776.  He was the eldest son of Anthony Lefroy, Lieut.-Colonel of the 9th Light Dragoons- the descendant of a Huguenot family, who were obliged to fly from Cambray, at the period of the Duke of Alva's persecution in the Netherlands, and took refuge in England.  The following inscription, on a monument in the Parish Church of Petham, Kent, to the memory of Thomas Lefroy. the great great grandson of Antoine Loffroy, who first emigrated from Cambray, furnishes an interesting record of the circumstances under which the Lefroy family first came to adopt England as their country:
Sacred is
THOMAS LEFROY,
OF CANTERBURY,WHO DIED THIRD DAY OF NOVEMBER, 1723, AGED 43
OF A CAMBRESIAN FAMILY,
THAT PREFERRED RELIGION AND LIBERTY
TO
THEIR CONTRY AND THIER PROPERTY,
IN THE
TIME OF THE DUKE OF ALVA'S PERSECUTION.
Lieut.-Colonel Lefroy, the father of the subject of this memoir, entered the army in 1763 as Ensign in the 33rd Regiment, then quartered in Ireland, and at the early age of twenty-three married Anna, daughter of Thomas Gerorge Gardner, Esq., of Doonass, in the County of Clare....
Jane referred to Tom as "my Irish friend" which led me to believe that he truly was all "Irish".  After looking at the above few details, I began to wonder "just how much "Irish" is he?"  The very name "Lefroy" reminds me of it being 'French' from my studies of French in school.  So his ancestors did indeed come from the French area and landed in England.  I have not followed the exact lineage, but some of those might have married an English woman.  And as it turns out, Tom's father did indeed marry an Irish lady.  So in essence Tom is part French and part Irish.
So, on that information I rest my case that Tom was not all Irish, and by that it leads me to wonder about his personal character as defined by his ancestors.  I say that because in my studies of my own ancestors I have noticed certain characteristics that are inherited due to the nationalities of my ancestors.
Another subject along these lines is the question "What on earth was the British army doing in Ireland?"  But that is a question for another day!
Yrs aff'ly
Linda the Librarian