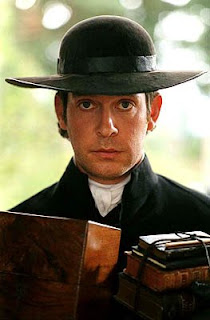 This week it is actually more a scene which I have chosen; it is a hilarious and truly adored scene from Pride and Prejudice and I dont believe we have included it in our quote of the week as of yet.

I have decided to quote parts of the scene where Mr Collins attempts to propose to Lizzy. One of my favourite elements is Mr Bennet's response to Mrs Bennet's stress. I have highlighted some of my favourite lines from the passages taken from this scene displayed below:
"Oh! Mr Bennet, you are wanted immediately; we are all in an uproar. You must come and make Lizzy marry Mr Collins, for she vows she will not have him, and if you do not make haste he will change his mind and not have her.''
Mr Bennet raised his eyes from his book as she entered, and fixed them on her face with a calm unconcern which was not in the least altered by her communication.
"I have not the pleasure of understanding you,'' said he, when she had finished her speech. ``Of what are you talking?''
"Of Mr Collins and Lizzy. Lizzy declares she will not have Mr Collins, and Mr Collins begins to say that he will not have Lizzy.''
"And what am I to do on the occasion? -- It seems an hopeless business.''
"Speak to Lizzy about it yourself. Tell her that you insist upon her marrying him.''
"Let her be called down. She shall hear my opinion.''
Mrs Bennet rang the bell, and Miss Elizabeth was summoned to the library.
"Come here, child,'' cried her father as she appeared. "I have sent for you on an affair of importance. I understand that Mr Collins has made you an offer of marriage. Is it true?'' Elizabeth replied that it was. ``Very well -- and this offer of marriage you have refused?''
"I have, Sir.''
"Very well. We now come to the point. Your mother insists upon your accepting it. Is not it so, Mrs Bennet?''
"Yes, or I will never see her again.''
"An unhappy alternative is before you, Elizabeth. From this day you must be a stranger to one of your parents. -- Your mother will never see you again if you do not marry Mr Collins, and I will never see you again if you do.''
Elizabeth could not but smile at such a conclusion of such a beginning; but Mrs Bennet, who had persuaded herself that her husband regarded the affair as she wished, was excessively disappointed.
"What do you mean, Mr Bennet, by talking in this way? You promised me to insist upon her marrying him.''
"My dear,'' replied her husband, "I have two small favours to request. First, that you will allow me the free use of my understanding on the present occasion; and secondly, of my room. I shall be glad to have the library to myself as soon as may be.''
I love this brief window into the personality and character of Mr Bennet; it is enlightening. Jane almost keeps him in the shadows and then wham, he appears with the delivery of such classic lines. A fascinating character.
Slightly later in the scene, Charlotte Lucas has come to visit the family for the day and we get the completely contrasting and slightly imposting character of Mrs Bennet in full bloom!
"Aye, there she comes,'' continued Mrs Bennet, "looking as unconcerned a s may be, and caring no more for us than if we were at York, provided she can have her own way. -- But I tell you what, Miss Lizzy, if you take it into your head to go on refusing every offer of marriage in this way, you will never get a husband at all -- and I am sure I do not know who is to maintain you when your father is dead. -- I shall not be able to keep you -- and so I warn you. -- I have done with you from this very day. -- I told you in the library, you know, that I should never speak to you again, and you will find me as good as my word. I have no pleasure in talking to undutiful children, -- Not that I have much pleasure indeed in talking to any body. People who suffer as I do from nervous complaints can have no great inclination for talking. Nobody can tell what I suffer! -- But it is always so. Those who do not complain are never pitied.''
The last line, "those who do not complain are never pitied" is actually the line which drew me to think of the whole scene. In the last few weeks I have been going to a series of interviews in search of a new job. I realised afterwards when the first few returned to me with disappointment that I did not want pity. I never want pity. So I continued to think only in a positive light and see the rejections as a chance to work on what I had done wrong. Yesterday I had an interview and I got the job which I am very happy about. So this line is very wise and something we should all adhere too.
Pic 1: Mr Collins
Pic 2: Mr and Mrs Bennet

Ok so I'm working on the banner and the wallpaper. Is there anything in particular you want to include in the banner, I mean apart from "Becoming Jane Fansite"? Any picture request? How do you like your wallpapers?

"I have not the pleasure of understanding you,'' said he, when she had finished her speech. ``Of what are you talking?''

LOL! I always love it whenever I remember this one. Genuinely funny!

And Maria... I think any JA (AH) and TL (JMA) pic will do well. The dance picture is of particular interest, tho. And the 'Becoming Jane Fansite' words. That's about it, I guess.

Oh hey, and congratulations to the new job!!! You go for it, tiger!

And what's the saying? Something along the line of...
At the end of the darkness, there's always light. You just have to squint to see...