I posted a trivia quiz this time last week. I hope you all enjoyed it. 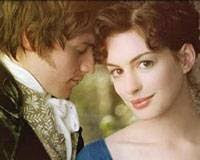 Here are the answers:

1. Of the following characters, who was fictional and who existed:

2. Which actor plays the character of Mr Wisley? 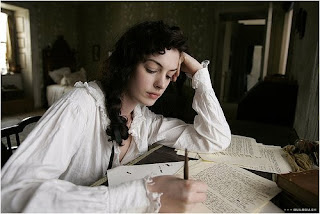 4. Name Jane’s six novels in the order that they were published.

5. What was the famous book that Tom gave to Jane in the library and told her to read?

6. At the end of the film when she is reading an extract from one of her novels to the young Jane Lefroy, which novel is the extract from (clue: see post within the last week)?

7. Whilst at dinner with Tom’s uncle during their visit to London, Eliza describes how her husband was killed. Was he:- Hung- Guillotined- Missing, presumed dead- Drowned- Died of Cholera 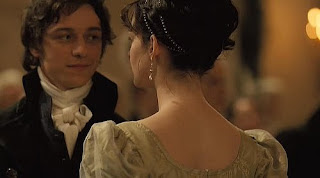 8. What colour was the dress that Jane was wearing at the second ball when herself and Tom shared their first kiss?

9. When Tom returns to Hampshire after news has broke that he is engaged to someone else, where does Jane learn that Mary, Tom’s new fiancé, is from in Ireland?

10. Which character from a Jane Austen novel is Lady Gresham supposedly modelled upon?

Lady Catherine from Pride and Prejudice

11. Which award did Becoming Jane win at the People’s Choice Awards?

12. In the film, who sent the letter to the Judge telling him about Tom’s intentions to marry Jane and consequently ruining their chances of being together? 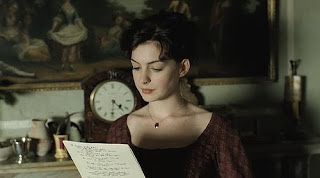 14. When Tom arrives in Hampshire, Jane is reading a speech in celebration of which special event?

The engagement of her sister, Cassandra, to Thomas Fowle

15. What is Jane doing in the opening scene of the film?

16. What does Jane read which prompts her to change her mind and return home to Steventon after Tom and herself had decided to elope?

17. How did Jane communicate with her brother George?

18. What did George Austen (Jane’s father) do for a living? 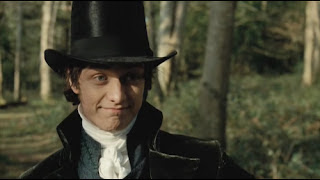 19. What was the name of the wood that Jane met Tom whilst they were both taking a walk?

20. Which of Jane’s novels was influenced most by the work of Mrs Ann Radcliffe?

Northanger Abbey- due to its gothic nature 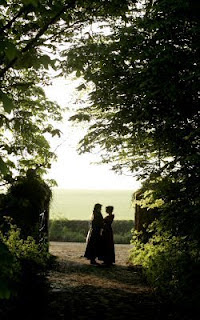 Thank you so much dear Rachel for the quiz. Admittedly, some of them truly brought me back the lovely memories of first viewing BJ. Ahh...the dress, James' eyes and smile... Jane/Anne's sorrow... etc etc etc...

Thanks again for being here!

I fell in love with the love story in Becoming Jane. I blog about it at http://redpenredtemper.info/?p=70 After seeing this, I had this urge to watch it again.

Thanks Geraldine for your comment.
Keep up the good work on your own blog.