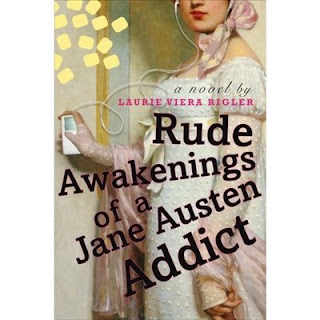 This is a very belated review of another excellent book from Laurie Viera Rigler. Rachel has reviewed Laurie’s previous book (Confessions of a Jane Austen Addict) exactly two years ago, the post can be found here. For those who have not read the first book and are interested in jumping through the second book directly, I have to advise against it, for it’s important to know the previous plots to fully understand the story in ‘Rude Awakenings of a Jane Austen Addict’. It is possible, of course, to enjoy ‘Rude Awakenings’ without first reading ‘Confessions’, but I still think it increases the chance of being confused.

Okay, so in Confessions, a young Californian girl Courtney Stone woke in the body of a young Regencial British Jane Mansfield. The year was set back nearly 200 years, from 2007 to 1813. Rachel has explained everything in her review, so I won’t reiterate the plot here. I have to say though, that I really enjoyed Confessions; I remember reading it in one night, couldn’t put it down, and had to wake up dizzily the next morning from the lack of sleep. I do admit that I was a bit confused with the ending, for [spoilers for those who haven’t read Confessions], it seemed that Courtney had totally forgotten that she was Courtney. Instead, she was now 100% a believer that she was Jane Mansfield instead, living happily ever after with her ‘Mr. Darcy’, a dashing man named Edgeworth who was the real beau of the real Jane Mansfield. How about Jane herself then? How was/is she doing in 2007?

Now, Rude Awakenings catches the tails of this body/life switch. But instead of 2007, Laurie moved the year forwards to 2009. Could it be because it would be much up to date to talk about California in 2009 than 2007? Perhaps because it was more tempting to include up to date stuffs like the amazing development of United States politics a.k.a. Barack Obama than talking about the previous administration? I’d like to think so… for I see no reason for Courtney to have her head injured in a swimming pool in 2007, switch body with Jane in 1813, and then Jane of 1813 woke up in Courtney’s 2009 body. Courtney’s friends kept suggesting that the (assumingly same) swimming accident pool had triggered Jane’s, eh Courtney’s, senses to take a leave of absence, so logically, Jane should wake up in 2007 as well, instead of 2009.

Anyway, aside from that hiccup, I think Rude Awakening is an excellent book. What I enjoyed the most was Jane’s different perceptions of what is right or wrong, agreeable or disagreeable, beautiful and not beautiful. Jane Mansfield was totally amazed at the many convenience of 21st century, including the wonderful brassiere that was non existent in the early 19th century. She thinks that Courtney’s body is beautiful, complete with the slender swells, and her appreciations upon her ‘own’ body makes her friends happier, for they always attempted to make Courtney realize how beautiful she is, just as she is.

Jane was also bedazzled by the gigantic portions of modern breakfast (funny, I always thought Regencial breakfast as extravagant as well, judging from Pride & Prejudice etc…) and thought that modern humans tend to waste so much food and garbage (that I agree!). And what amazing inventions are computer and internet! Google is just incredibly helpful for Jane to understand Courtney’s world and traditions, even to understand various leaps in human history (I wonder if Jane would ever decide to visit her old village in England… the village still exists per her Google search). And wouldn’t it be fun to see how Jane addresses the amazing shopping trend called Ebay? She might decide to order a Regencial dress online and get addicted with online shopping! (speaking of true experience here…). Oh, and to find herself living the life of another Jane Austen fan, who possesses not only the authoress’ complete novels but also the adapted movies as well! What a joy! To quote Miss Bates: ‘Lovely, lovely, lovely!’

But there are other, more pressing matters for Jane to consider. Was it right for her to go out with a man without a chaperon, even if the said man claimed to be her good friend Wes? Was it even right for her to kiss another man who claimed to be his former fiancé? What about living together and premarital sex? And why – most importantly – does she have to live Courtney’s life as Courtney lives hers? What lessons must she learn?

And this sets the book to another psychological level, as Rachel also admitted in her 2007 review. Does Jane experience reincarnation or mere delusions? Will she ever wake up one day in her own body again? Meanwhile, how does she earn her own bread, now that she decided to quit her old, miserable job? Would it be proper indeed, for a gentleman’s daughter to work at all? What of Frank, Courtney’s former fiancé that kept begging her to forgive and accept him back? What of dearest Wes?

As I hoped, Rude Awakenings does a good job in tying up loose ends from the Confessions (which, I should have known, were left behind intentionally for a sequel). Apart from the 2007/2009 confusion, that is. But no matter. Jane learned a lot of herself, learned new things for her self development. Of the new meaning of independence. Of being a true woman. Of holding her own in the rough life of 21st century. Of cellular memories and the power to choose to be happy; to break old patterns. For she, as all Austen heroines, as Jane Austen herself, finally chooses to empower herself. To set herself free. To be independent, to be happy.

So I guess in the end, I am very thankful for Laurie to have written the book. I’ve written a personal post here, based on the lessons I received from this book (and from other books). And allow me to cite some very impressive quotes from Rude Awakenings here:

‘Today’s women are no less desirous of love, and marrying for love, than they were in [Jane’s] time. But they, like so many women before them, simply fear it is an unattainable goal. And thus they settle for what fleeting pleasures they can find, creating an endless cycle of pleasure, despair, pleasure, despair, ad infinitum.’ (p. 278)

With that note, what’s left for me is suggesting that you should buy the book. Or at least, borrow your friend’s copy if the Amazon’s copy is slow in arriving. It’s an enlightening experience.

Pic: Cover to 'Rude Awakenings of a Jane Austen Addict', from Amazon.com

Update 28 July09:
Laurie has just emailed me to thank for the review and to explain about the 2007/2009 stuff. This is her reply verbatim: "Nowhere in the first book is the year 2007 ever mentioned, except on the copyright page. Besides, as the fortune teller told Courtney, time is not linear."

Ah, I see now. I think Rachel and I just assumed 2007 because Confessions was written in 2007. Time is indeed not linear, but if Laurie did mention 2007 in her book, then it would be harder to bring Jane right into 2009 with Courtney's exact chronological life (including the cancelled wedding and swimming pool accident). So it's really good on Laurie's part not to mention the year 2007 at all in Confessions, deliberate for sequel or not!

Of course if she did so, we can always go to the alternative timeline. As a Star Trek fan, it wouldn't be so hard for me to accept it...