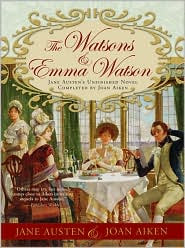 Those of you who subscribe/follow or site would have received the previous quote I posted earlier about Mansfield Park. A very gorgeous quote… which unfortunately has to be deleted for it has been posted in February, as shown here. We were doing house cleaning in BJ Fansite, placing each quote into one of Jane Austen’s book (or letter), but I haven’t done that particular one for MP. Hence, I made this silly mistake, completely unaware that Michelle has posted it earlier. My apologies Michelle, and to you all.

Now, after the said hiccup, let’s move on with the replacement quote, part of which due to time constrain I have to steal from the very left bar of this site. Luckily, I was the one who placed it there, and since it has never been discussed in this manner (under the Jane Austen Quote of the Week, I mean), I have no guilt whatsoever to reiterate it here.

The Watsons, Part 1. Emma Watson was talking to her elder sister about her other sister named Penelope who stole the elder Miss Watson’s lover Purvis. The quotes were taken from classiclitabout.com, for my copy is in the office.

"Not much indeed -- but you know we must marry. I could do very well single for my own part; a little company, and a pleasant ball now and then, would be enough for me, if one could be young forever; but my father cannot provide for us, and it is very bad to grow old and be poor and laughed at. I have lost Purvis, it is true; but very few people marry their first loves. I should not refuse a man because he was not Purvis. Not that I can ever quite forgive Penelope."

"I am sorry for [Penelope’s] anxieties," said Emma; "but I do not like her plans or her opinions. I shall be afraid of her. She must have too masculine and bold a temper. To be so bent on marriage, to pursue a man merely for the sake of situation, is a sort of thing that shocks me; I cannot understand it. Poverty is a great evil; but to a woman of education and feeling it ought not, it cannot be the greatest. I would rather be teacher at a school (and I can think of nothing worse) than marry a man I did not like."

Of course at that time, being a governess (or a school teacher) is considered rather ‘less’ than being a gentlewoman of no profession. But I see that Jane Austen’s writing here was true to her heart. Although here we may find the authoress’ belief that there may be someone better behind the corner, still in her unfinished novel there echoes the same persistence not to marry, unless for love. Strong, wonderful woman.

Side note: Had Jane Austen finished The Watsons, it would be a very interesting novel. I read it a while ago without truly devouring it, and I'd like to re-read it again, carefully this time.


Pic: Cover to The Watsons & Emma Watson, by Jane Austen and completed by Joan Aiken, from Barnes & Nobles. I'd like to know if anyone has read it, and what you think of it?

Labels: Quote of the Week, The Watson

I am a great fan, sindce a last year!
Gr. Anna

Please get your facts straight. While "The Watsons" is an unfinished novel, it was not her last. That would "Sanditon," which she started after finishing "Persuasion" and worked on until nearly 3 months before her death.

Quite correct, Anonymous, and for our edification here is a link to a Jane Austen Chronology by Jim and Ellen Moody, so that we may keep the facts straight.

Thanks for the correction.

Ah yes, thank you Anon for the correction. I was in a hurry that time, having so much to do, and thus the price was being careless. I will try to avoid it happening again.

Thanks so much Linda for the support. I shall correct it right now.

Thank you Icha for a great quote yet again; we do know your time constraints.
And thank you Linda for posting the chronology so promptly!
I am in complete agreement with this line of thinking. I would never live with myself if I married a man for situational means rather than matters of the heart.

Hi Rachel! Love your comment! You know what, there's a famous Indonesian song called 'I'm single and very happy', and the lyric is so good!

Have no time to translate it now, but when I do, I will send the translation to you.

Rachel said, “I would never live with myself if I married a man for situational means rather than matters of the heart.”

Please allow me to address that aspect of marriage from the view of ‘been there, done that’. I speak from the experience of my 68 years. Here is my story.

At a very early age, I realize that my Mom married my Dad to escape from her domineering father. The depression was on and there were no jobs available so that she could support herself. So she got married out of desperation. Therefore, I made up my mind that I would only marry someone that I loved. At the ripe old age of 28, General Tilney shows up. Of course, I had no idea who General Tilney was or that my beloved was like him.

After 23 years of misery, 3 kids, and only a very few happy moments, I left home because I learned that it takes more than simply marrying someone you love. That is the ‘heart’ side of the business. What needs tending to is the ‘head’ side, which includes such considerations as situation, character, health, goals, etc. Lately, there are quite a number of books out on the subject of making a good marriage. So Rachel, you are quite right about ‘only’ marrying a man for situational means. It is best not to leave your heart out either. Oh, and by the way, the General is still the ‘love of my life’! The problem is that I simply cannot live with the misery anymore.

So, Ladies and Gentlemen, I encourage you to ‘do it right’!

WOW! Linda, I thank you so much for your honesty here. 'Been here, done that' makes you very wise, I see... And coming from a broken home situation myself, I truly uphold the importance of marriage, and not to rush into it before Its Time. For there goes the saying: "Everything in its own time."