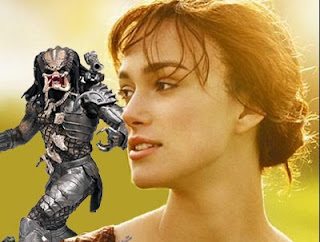 Okay Janeites, don't kill the messenger. It's a few months old news anyway, but it might worth knowing, in case some of you (like myself) are avid fans of both Jane Austen and sci-fi. So the story from sci-fi site io9 goes... that we are to have three JA-inspired sci-fi movies. Claps or collapse, your choice my dear friends.

First is the Pride & Prejudice & Zombies, a movie based on the recently published (ahm, rather twisted) novel of the same title. Amazon.com informed me about this book yesterday, and the first few pages of the novel caught my attention to the point of me laughing merrily...so honestly, I'm tempted to read more (just don't shoot me...). I am uncertain of my degree of affinity to the book, so I might tell you much later on...

Second is the Pride & Predators, to be produced by Elton John (yeah, that Elton John the song writer and singer). It's about alien attack in the Regency world... etc etc etc... ahem, and shooting is to begin in London later this year. Again, don't shoot the messenger.

Third is the movie version of Lost in Austen by Columbia Pictures, as we have reported earlier. Well, since LIA incorporates time warp journeys elegantly, I am very much looking forward to this one... perhaps by the end of the year? Not sure. I know for sure I love the ITV series version tho!

I guess, in spite of everything, I'm still happy that Jane Austen's works reach far into the 21st century, and even to the stars and the alien world!

Well, I'm not sure I would like those - also modern day adaptations of Jane Austen books do not tempt me. As a "purist" I prefer her books and the faithful movie adaptations :)

I agree with you, Barbara. I'm a purist also. I had to divorce myself from the 'real' Jane Austen in order to attach myself to the movie "Becoming Jane". I had to view it as a movie only. It was the ending that really touched my heart. Not true, but touching.

Hehehe... Ladies, as I said, don't kill the messenger. I don't think I will like Pride & Predator either. But the PP and Zombie book still intrigues me, at least the first few pages. The writing style is regency, very much Jane's I would say, though the rest is beyond my knowledge...

At least the Lost in Austen movie might worth a wait... :-D

I really enjoyed ITV's Lost In Austen and hope that the movie version is just as good; although I'm not so sure about the heroine being from NY. Time will tell!

Ack! Blarney Girl, from where did you obtain the news that the movie Amanda would be from NYC? I'm not particular towards nationalities, but for these kind of stories, I still prefer listening to British accent than other accents (no offense, really...). I mean, I know it might be fun to have a New Jersey accent girl flirting with Mr. Darcy... but I would miss the Hammersmith Amanda terribly...

hehe my darling informed me about the Pride & Prejudice & zombies a while ago. Perhaps that is a movie more to his liking...?

I too enjoyed Lost in Austen actually, made it more plausible that I myself actually might end up in an Austen novel. I wouldn't mind... ;)

Ok so my little darling is soon 4 months old. Where did the time go?! anyone seen it?

Hugs & kisses from Sweden
ps I've put in a translator on my Éomer-experience blog if you are interested... :P Well it kind of sucks since it direct translates, but anyways... Never really have the time to update the English one...

Icha, I'm completely with you!! With JA in any form, it needs to stay British -- IMHO.

I read the news on one of the JA blogs out there - Laurel Ann, Vic or the Editrix, but can't remember which. So, I Googled it and this is what I found.

Maybe she'll be a Brit living in NY???

Maria, congrats for the 4 months old Eomer! Time goes by indeed! Are you to take him to see PP and Zombie along with hubby? :-D

Blarney Girl, I am more ready to think over the possibilities of a Brits girl living in NY :-D and then husks back to Georgian England somehow...