The most expensive hair in the world! 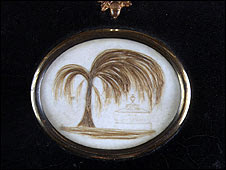 Thanks to Mariana for the tips, we learn of the sale of a lock of Jane Austen’s hair. Experts were actually unsure if the lock was actually Jane’s, but it still did not fail to attract buyers. Dominic Winter Auctioneers of Gloucestershire eventually sold the lock for more than GBP 4,800. The lucky and rich buyer is Holybourne Rare Books on behalf of an anonymous Janeite. The auburn coloured lock was fashioned into a weeping willow encased in a three-inch frame.

There’s a discrepancy with the final price. The Telegraph UK said it was GPB 5,640; BBC and Wilts and Gloucestershire Standard said it was GBP 4,800. According to WGS, auctioneer Chris Albury said that “If we had been able to prove it conclusively I'm sure there would have been a lot more bidders and a much higher price.”

By the way, if any of you missed James McAvoy, you might want to read this article of The Telegraph. It’s about Wanted, not Becoming Jane, and James did not use his British/Scottish/Irish accent, but still it’s JMA!

Pic: The famous lock of Jane Austen, from BBC