The Two Lefroy Coats of Arms 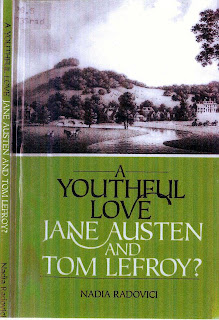 Sorry for the long silence on my part, been busy here (many thanks to Michelle though, for her excellent updates on JA season!). Now, I just would like to give some other updates: the Radovici Project (i.e. reprinting Nadia Radovici’s book) is experiencing great progress. Thanks to you all, now we have at least 301 signatories from many countries that support the reprint of ‘A Youthful Love: Jane Austen and Tom Lefroy?’ Those who have friends, family, spouse that are interested in our project, please encourage them to sign our petition here.

Also, we’re having some good signs and hints about the publication plan for Nadia’s book. I cannot say anything more than this one ^_^ but trust me, Team Jane (particularly Rachel) is very very excited now! Oh, and Veronica as well!

Now, some of you might have noticed that Team Jane has been in contact with Edward Lefroy, a direct descendant of Tom Lefroy from his fifth son (the Very Reverend Jeffry Lefroy). A few weeks later, unexpectedly another young Lefroy contacted us. Ben Lefroy this time, a direct descendant of Tom Lefroy’s second younger brother Benjamin Lefroy. Ben pointed out a very interesting fact that I now explain a bit here: about two different Lefroy Coats of Arms: the Australian version and the version.

After cross-checking with Edward, we conclude that indeed there are two different Lefroy crests. I should have detected this fact months ago when I first posted an article about the Lefroys in , courtesy of Linda’s tips. However, I failed to notice it, and hence I thank Ben for his sharp eyes. 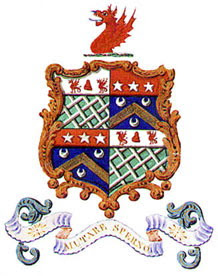 Above is the original Lefroy crest I obtained from Edward. ‘The cross lines are white, the background green, and the wyverns’ red. The item in the middle is a dunce's cap. The wyverns should have no feet, as they are the heraldic device for a worm,’ as Edward explained to me. 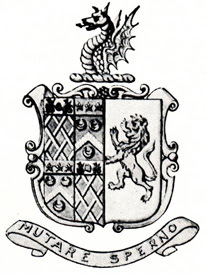 Now, the above is the coat of arms of the Australian Lefroys I obtained from Cranfield’s ‘From Ireland to Western Australia’. Edward suggested that the lion was incorporated to honour the Bruce family. It will be very interesting to have an Australian Lefroy giving us input here on the origin of that lion inside the Lefroy crest.

Well done Icha!!
Ooh - I am just bursting with excitement!!