Information from the Lefroy family themselves! 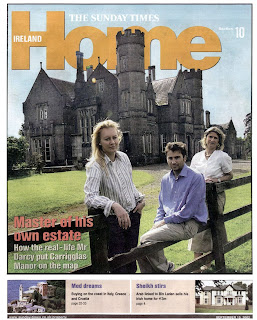 Team Jane are very, very excited by a recent development in the last few days.
Edward Lefroy, a descendent of Tom Lefroy made contact with us! Edward owns a surf school in Cornwall, UK and has just won The Surfer’s Path Magazine’s ‘Best Surf Travel Company’ award. He located this website through a search and wanted to let us know of his willingness to help us in our quest for information about the Lefroy family.

In Edward’s own words:
“Thomas Lefroy was my great great great great grandfather - I am descended from his fifth child Jeffry (all descendents from the first four children that had issue are now dead) and indeed my grandfather (JAP Lefroy, who you mention, now deceased), father and brother are both called Jeffry. I grew up Carrigglas Manor, which sadly my parents had to sell two years ago.”


We asked him a few questions that we were longing to know the answers to and between himself and his father (Jeffry Lefroy), we can report……….

- The books from the library at Carrigglas were not sold or auctioned. Tom Lefroy’s books and belongings are in safe storage until a new library can be built at the new Lefroy residence. We were so excited to find out that among the belongings is a photograph of Jane Christmas Lefroy (Tom’s daughter)!

- One of our main questions was related to the Cadell letter. See this post for more information. It is speculated that a Thomas Lefroy (either our Tom or Thomas Edward Preston Lefroy; his nephew) attended the Cadell book publisher’s sale in London (circa 1840) and bought the rejection letter that George Austen (Jane’s father) had sent to them in the hope of getting the first draft of Pride and Prejudice published. We wanted to know which Tom bought the letter, hoping that it was Tom Lefroy senior. T this time, this is one of those mysteries that will take longer to solve! We will get there but at the moment it will remain family lore.

- We have learned that there was a shooting accident at Carrigglas involving a young Australian relative of Tom’s. The Australian background links to Tom funding the emigration of his nephews, Gerald and Anthony. One of these nephews married Mary Bruce, the first white woman to be born in Australia…interesting piece of trivia! It was one of their children who came back and had this fatal accident at Carrigglas. We have learned from Jeffry Lefroy that this young Australian is buried in the tomb of Colonel Anthony Peter Lefroy (Tom Lefroy’s father) at St Mary’s Cathedral in Limerick, Ireland. The unfortunate news is that when they opened the tomb, the body of Col. Anthony Lefroy was missing. The body snatchers, linked to Barrington’s Hospital, were probably responsible for this. Jeffry informed us that the body snatchers used to access them whilst the cement was still wet so that it was less obvious and they did not leave a trace.

We are so excited by this latest information and the fact that the living Lefroy family are interested in our findings and respect our research.

Thank you so much to Edward and Jeffry Lefroy from all of us.

Pic: Sent to us by Edward Lefroy. Taken from the front page of The Sunday Times Ireland. The picture is of the back of Carrigglas Manor and features Edward's wife, himself and his mother.

Rachel, thank you so much for the speedy upload!

Edward and Mr. Lefroy, thank you so much for trusting us. I hope we don't disappoint you in our search for truth. We will treat the information and materials you give us with full respect.

Everyone, fasten your seat belt please... I hope to post another development from another side of the world soon!

Oh, and I forgot to add how cruel and horrible those body snatchers are! I thought those things only happen in movies! So sad to have the body of Tom Lefroy's father missing...

Wonderful post Rachel!
Ooh, seeing on the site makes it that much more real. xo

Thank you agin to Edward and Jeffry!

Yes indeed, Thank you Edward and Jeffry. We are most obliged.

Hello, I'm Emily Mangles, my great grandmother was a lefroy, and consequencely I am Tom's great great great great grandaughter, and yes, for all you people who haven't researched properly enough to find out that jane austen really based the character of lizzie on tom, and mr darcy on herself I have 2 brothers, on who looks like tom lefroy, the other tall, dark and silent, mr darcyesque!! If you have any questions about tom or anything at all I will attempt to answer with help from various relatives!
Emily xxxxxxxxxxxxxx

Thanks a lot Emily for your offer, that's very kind of you.

In Jon Spence's book, there's a good analysis that Jane Austen transformed herself into Darcy... and I'm inclined to agree about it. But I think there's much more to that. I think JA mixed herself and Tom into both Darcy and Lizzy, but most importantly, to Jane Bennet and Mr. Bingley:

If you've read the two posts, it would be great to have your comments on them, Emily. Thanks a lot in advance.