"I Don't Believe in Mr Darcy"

She's only 18, and she describes herself as naive, but actress Imogen Poots, who's starring in the BBC's big Christmas costume drama about the life of Jane Austen, has no illusions about men.

Based on the life and letters of Jane Austen, the feature-length film focuses on the author's later years. Imogen plays Jane's niece Fanny, an ingénue who looks to her spinster aunt for guidance on matters of the heart. 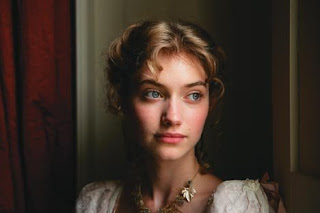 According to producer Anne Pivcevic, "Imogen has that combination of naivety and consummate intelligence that made her perfect. As soon as we saw her, there was never any question that she was Fanny."

"The corsets virtually cut off your breasts. I can't imagine how women ever lived in those clothes," she grimaces. She wasn't an Austen devotee ('I'd read Pride and Prejudice and Sense and Sensibility'), yet she quickly grasped the perennial Austen conundrum – should a girl marry for love or money?

In Miss Austen Regrets, the recurring advice Jane gives to Fanny is that she must marry for love.

"It's something we take for granted today – that we can earn our own living and marry whom we like," Imogen says. "But it was a harsh world then because women were reliant on men for their status."

I wonder if Imogen has fallen in love herself, but she is evasive on the subject of boyfriends. "I'm too young," she says, laughing. "I've done what Fanny does – met someone, thought, 'Oh my God, I'm in love!' and had those intense times where nothing else matters."

"I think that happens constantly when you're young because there will always be someone older and wiser to look up to," she adds. "But I don't believe in Mr Darcy. Men like him only exist in fiction."

I quoted excerpts of the interview relevant to Miss Austen Regrets, but I suggest you head over to the Dailymail and read the full article, because it's fantastic. So, do I believe in Mr Darcy? Hmmm, let's just say that I desperately will myself to, because yes, I'm convinced that there are real life "Darcy's" out there ... somewhere!! (far from here, I can tell you!)

Miss Austen regrets will air in the UK sometime in December and on February 3 in the USA.