Jane Austen Quote of the Week 252

I am using James Austen's "The Loiterer" for my Jane quote since I sincerely believe that Jane was influenced by his writings and she learned a lot, too. Since I have a minor in History, you will know that I love that subject and that is why I quote from James Austen's periodical "The Loiterer" Issue No. 7 this week. I will only quote a few sentences in order to pique your interest to read the entire Issue. So, speaking on the subject of "history" James writes in the second paragraph:


It relates indeed the vices of tyrants, the meanness of their flatterers, and the miseries of their people; but it relates also the virtues of their destroyers, the public spirit of a party struggling for liberty, and the happiness of a nation which enjoys it. And if the unhardened sensibility of youth, and the unpolluted bosom of innocence, will turn in disgust from the short-lived frenzies of a Caligula or a Claudius, they will dwell with repeated rapture on the glorious annals of a Trajan or an Antonine. - Since history can boast examples at once so powerful to deter from vicious extravagance, and incite to virtuous undertakings, no wonder it has been ever the favourite study of the wise and great: that it has stimulated the one to new discoveries, and the other to difficult achievements. 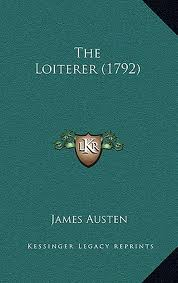 Well, I make no claim to be one of the "wise and great" due to my study of history, but I have certainly learned a lot from it. I remember the old saying that "history repeats itself" and I can see history repeating itself in these present days of turmoil and troubles as well as seeing those who "turn in disgust" from these turmoils.
I highly recommend the entire issue for your consideration and you may read it here: The Loiterer, Issue No. 7.
Because of my intense love of History and due to the events of these days, I stumbled onto a slew of historical writings that shed a lot of light on the current events of today. Consequently, I found Daniel Defoe, William Wilberforce, and the multitude of "periodicals" mentioned by my esteemed and beloved James Austen in his Loiterer. I have found tons on line and have downloaded many so that I can have them on hand, especially since they are out of print. Thank goodness for Google books. And lest I forget, the multitude of writings mentioned by Jane, herself. I must say that all that will keep me busy for quite a while and they are too numerous to mention all the titles. So Happy Reading and Searching.
Linda the Librarian
Pic: The Loiterer

Labels: Family and friends, Quote of the Week