Generally mothers want the best for their children and have good intentions. I work with alot of young people who find their mothers a drain and certainly "uncool". With age my perspectives have changed greatly in this regard and although I am not a mother myself allowing me to see the relationship in both directions, I find interactions between parents and their children﻿ fascinating to observe.

Mrs Bennet always makes me chuckle and this large selection of lines taken from early in Pride and Prejudice (chaper 9) does not fail to amuse me. The conversation involves Mr Darcy, Mr Bingley, Elizabeth and her mother primarily. Elizabeth is embarrassed by her mother's bold comments.
There are many types of people walking this earth, each with their own story - variety is the spice of life. 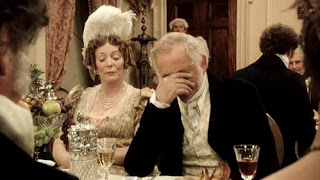 Lizzy," cried her mother, "remember where you are, and do not run on in the wild manner that you are suffered to do at home."
"I did not know before," continued Bingley immediately, "that you were a studier of character. It must be an amusing study." "Yes; but intricate characters are the most amusing. They have at least that advantage." "The country," said Darcy, "can in general supply but few subjects for such a study. In a country neighbourhood you move in a very confined and unvarying society." "But people themselves alter so much, that there is something new to be observed in them for ever." "Yes, indeed," cried Mrs. Bennet, offended by his manner of mentioning a country neighbourhood. "I assure you there is quite as much of that going on in the country as in town." Every body was surprised; and Darcy, after looking at her for a moment, turned silently away. Mrs. Bennet, who fancied she had gained a complete victory over him, continued her triumph. "I cannot see that London has any great advantage over the country for my part, except the shops and public places. The country is a vast deal pleasanter, is not it, Mr. Bingley?" "When I am in the country," he replied, "I never wish to leave it; and when I am in town it is pretty much the same. They have each their advantages, and I can be equally happy in either." "Aye—that is because you have the right disposition. But that gentleman," looking at Darcy, "seemed to think the country was nothing at all." "Indeed, Mama, you are mistaken," said Elizabeth, blushing for her mother.

"I have been used to consider poetry as the food of love," said Darcy. "Of a fine, stout, healthy love it may. Every thing nourishes what is strong already. But if it be only a slight, thin sort of inclination, I am convinced that one good sonnet will starve it entirely away." Darcy only smiled, and the general pause which ensued made Elizabeth tremble lest her mother should be exposing herself again.

Oh, yes, Mrs. Bennet by far tops everyone else on The List of Embarrassing Parents. That first quote you've posted makes me wince aloud every time - I know it's been said before but I'm saying it anyway: Austen's a genius.

Thanks Lady Disdain for your comment. Yes Jane Austen is fantastic isnt she? She generates the most intriguing of characters.