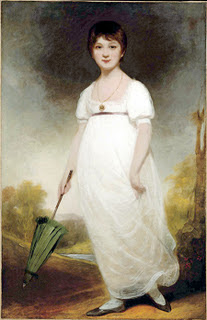 Firstly Happy New Year to you all and thank you very much for your continued support. If any of you have any suggestions on Jane-related things we can do this year on the blog then please do write to us.

Linda has kindly made me aware of a website that we wanted to bring to your attention. It provides information about The Rice Portrait of Jane Austen.
Before I continue I want to link this to a fantastic article that Icha wrote here on the blog in July 2007 about this very same topic Rice Portrait and Clarke's Sketch. Basically it is believed that the 'Rice Portrait’ refers to a portrait of a young girl made by Ozias Humphry, an English painter (1742-1810). It is proposed that the portrait is of Jane Austen when she was around 13/14 years old but there has been much debate about the authenticity of this portrait.

The website mentioned above, The Rice Portrait of Jane Austen, has recently been constructed by Anne Winston Rice who was married to Henry Rice, a descendent from Jane. She wants to set the record straight about whether this portrait is indeed Jane Austen, she believes it is.

The website is quite detailed and I will not try to summarise all the information here as it is well worth exploring yourself if you are interested. She describes 4 pieces of primary evidence which puts together an excellent case. I have simplified the information below:

- Colonel Thomas Austen, Jane's second cousin, had possession of the painting and gave it to his great friend Colonel Thomas Harding-Newman in 1818. Colonel Harding-Newman’s son wrote in 1880: “I shall hope to give another painting of Jane Austen to her relative Morland Rice. It is of a girl about 15, and came into my family the gift of Colonel Austen of Kippington, to my mother-in-law, or rather, step-mother, my father’s second wife, who was a great admirer of the novelist."

- Admiral Sir Francis Austen, Jane's brother, was very close to his grandson John H. Hubback and it is believed he shared valuable information regarding the Rice Portrait with him. Hubback told Mrs Graveson (a lady researching the portrait) that his cousins, the Rices, owned the only professionally executed painting of the authoress.

- Lord Brabourne was the eldest son of Fanny Knight, who married a Knatchbull Hugesson. He was Jane Austen’s great nephew, as also were John Hubback and Morland Rice. They were all cousins. In 1884, he published the first book about Jane, her “Life and Letters”. He relates how he has written to Mr Cholmeley Austen-Leigh about Morland Rice’s portrait, and that Mr Cholmeley Austen-Leigh has replied that if Morland’s portrait is authentic.

- Fanny Caroline Lefroy, the granddaughter of the Rev. James Austen was the family historian. Her mother, Anna Austen had lived in the same house as Jane Austen for some ten years, and therefore would have known what she looked like. Morland Austen, who received the portrait, asked Fanny Caroline Lefroy for her opinion about the portrait. She says she “knew before of the portrait in your possession”, and cites one or two little difficulties but only of when, and where, the portrait was painted.

Labels: About Jane Austen, Quote of the Week

Thank you very much for the New Year quote, Rachel dearest. And may 2012 brings happiness, health, love and prosperity to all of us!