Posted by Mariana, first part of the article is taken from the Addicted to Jane Austen blogspot:
http://addictedtojaneausten.blogspot.com/2008/06/jane-austen-sophia-sentiment.html
Wedensday, 11 June 2008 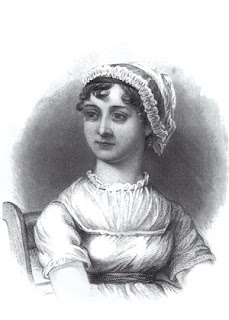 On the posthumous publication of Persuasion and Northanger Abbey, Jane’s favourite brother Henry Austen described her physical appearance thus: “It might with truth be said, that her eloquent blood spoke through her modest cheek.” As Marghanita Laski points out, this is an incredibly pompous-sounding tribute - until we realise that these same words, originally from the poet John Donne, are quoted by Henry Fielding in Tom Jones to describe Sophia Western, who finally marries Jones - “Her pure and eloquent blood spoke in her cheeks”.

Furthermore, Sophia Western’s complexion “had rather more of the lily than the rose; but when exercise, or modesty [emphasis added] increased her natural colour, no vermilion could equal it.” Sophia’s eyes were very dark and her black hair was “so luxuriant that it reached her middle, before she cut it to comply with modern fashion”. Louisa Austen’s description of her aunt Jane is as follows: “large dark eyes and a brilliant complexion, and long, long black hair down to her knees”

From here, we may need to take another look at the “Sophia Sentiment” who wrote to James Austen’s publication The Loiterer on 28 March 1789. Some critics have already suggested that “Sophia Sentiment” was Jane Austen. Claire Tomalin does not, on the grounds that “Miss Sentiment” deplores women’s taste in literature. However, soon after this, Jane Austen uses Sophia for the heroine’s name in her satire Love and Freindship, [sic] attacking the excesses of the romantic novel, a favourite Austen theme. Tomalin suggests that repeated use of the name Sophia may have been a running family joke. If this is the case, which seems likely, it is not hard to imagine where the joke originated. 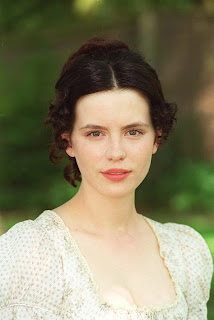 from the second edition of Mansfield Park, inscribed "l'aimable Jane" and presumed to be Jane Austen and also this line from Emma: "That sweet, amiable Jane Fairfax! said Mrs. John Knightley”) was “a middle-sized woman; but rather inclining to tall”, her black hair “was now curled so gracefully in her neck, that few could believe it to be her own” and “her nose was exactly regular, and her mouth, in which were two rows of ivory, exactly answered Sir John Suckling’s description in those lines:

Her lips were red, and one was thin,
Compar’d to that was next her chin.
Some bee had stung it newly.”

We are also told that Sophia (eighteen “when she is introduced into this history”), was in love with Tom: “her heart was irretrievably lost before she suspected it was in danger”, but “though this young gentleman was not insensible of the charms of Sophia; though he greatly liked her beauty, and esteemed all her other qualifications, she had made, however, no deep impression on his heart; for which, as it renders him liable to the charge of stupidity, or at least of want of taste, we shall now proceed to account. The truth then is, his heart was in the possession of another woman” - whose name was Molly…

I think you’ve already made the connection with our Tom and his Mary (again, there could be some truth in Joan K Ray’s article: The One-Sided Romance of Jane Austen and Tom Lefroy) and also, our dear Edward and Elinor’s story in Sense and Sensibility. 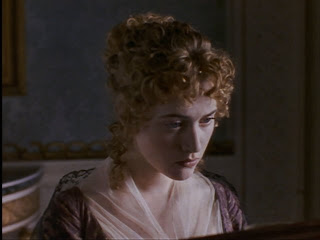 Reading how Jane was described by her family and friends, you will find not only similarities with Sophia but also with some of her own heroines.

A good example will be Marianne in Sense and Sensibility:

“Her form, though not so correct as her sister's, in having the advantage of height, was more striking; and her face was so lovely, that when in the common cant of praise, she was called a beautiful girl, truth was less violently outraged than usually happens. Her skin was very brown, but, from its transparency, her complexion was uncommonly brilliant; her features were all good; her smile was sweet and attractive; and in her eyes, which were very dark, there was a life, a spirit, an eagerness, which could hardily be seen without delight.” 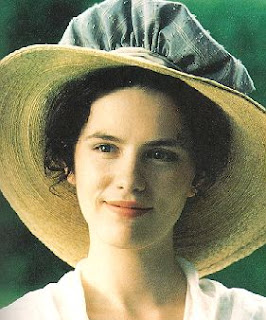 Another one will be Emma - one of the few characters that Jane ever described: "Pretty! say beautiful rather. Can you imagine anything nearer perfect beauty than Emma - face and figure?...Such an eye! - the true hazel eye - and so brilliant! regular features, open countenance, with a complexion! oh! what a bloom of full health, and such a pretty height and size; such a firm and upright figure. There is health, not merely in her bloom, but in her air, her head, her glance."

Louisa Austen: “large dark eyes and a brilliant complexion, and long, long black hair down to her knees”

Henry Austen: "Of personal attractions she possessed a considerable share. Her stature was that of true elegance. It could not have been increased without exceeding the middle height. Her carriage and deportment were quiet, yet graceful. Her features were separately good. Their assemblage produced an unrivalled expression of that cheerfulness, sensibility, and benevolence, which were her real characteristics. Her complexion was of the finest texture. It might with truth be said, that her eloquent blood spoke through her modest cheek. Her voice was extremely sweet. She delivered herself with fluency and precision. Indeed she was formed for elegant and rational society, excelling in conversation as much as in composition." 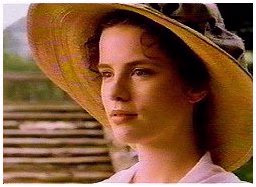 Edward Austen Leigh: "In person she was very attractive; her figure was rather tall and slender, her step light and firm, and her whole appearance expressive of health and animation. In complexion she was a clear brunette with a rich colour; she had full round cheeks, with mouth and nose small and well formed bright hazel eyes, and brown hair forming natural curls close round her face."

Sir Egerton Brydges: "Her hair was dark brown and curled naturally, her large dark eyes were widely opened and expressive. She had clear brown skin and blushed so brightly and so readily."

Mr Fowle: "... certainly pretty-bright & a good deal of colour in her face – like a doll – no that would not give at all the idea for she had so much expression – she was like a child – quite a child very lively and full of humour." 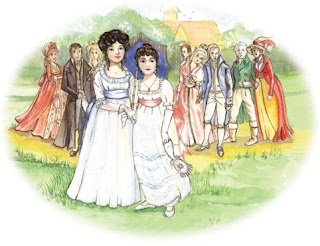 I forgot to mention this one: “Buy two brown ones, if you please, and both of a length, but one longer than the other -- it is for a tall woman. Seven yards for my mother, seven yards and a half for me;” (Jane’s Letters - Steventon: Sunday January 25, 1801)

Thank you for taking the time to read my ‘new’ Jane-Tom obsessions and posting them on your blog. I have sent this morning something that I think you’d like even more –and that’s only because you dear, dear Icha, encouraged me to “keep writing” :))

My love and ‘freindship’ to all of you