Marianna has so kindly made us aware of three youtube links which will help us to enjoy the new series of Emma even more!

The first is a behind the scenes look at the making of the series with some cast interviews. So exciting.

The second is a fantastic video made of the filming of Emma in Kent, UK. The music chosen is none other than from the wonderful Becoming Jane soundtrack. 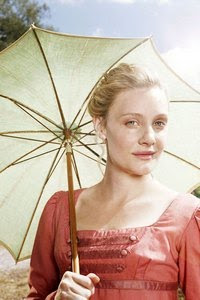 Yeah, where's the ep 2 and 3? Couldn't find it in YT! I LOVE Ep 1, and of course Romola! She's just adorable. Surprisingly, Miller grows in me too... despite my still avid fandom for Jeremy Northam and Richard Armitage (who was rumoured - ahem - by Michelle, I and many other RA Army to be the next Knightley!).

I have just watched the final episode!!! Oh my god, I loved it. I completely appreciate some of the criticism I have heard about the predictability of the Emma and Knightley match but I cannot help it, my heart has always overtaken my mind, I loved was in pieces with the romance of it. Mr Knightley was played BRILLIANTLY by Jonny Lee Miller- he was subtle at the opening but by the end was simply adorable. I really thought Romola was exceptional but I knew that I would find that the case before I saw the first episode. From previously seeing her in numerous roles, I thought she would be able to portray Emma suitably. And she did. I also have to say again that Tamsin Greig as Miss Bates was just brilliant. They were all well cast. I have literally just left the sofa from watching it so I am still abit excited and romanced. I will calm down and sleep on it and try to come up with some more constructive comments!

Ever since I watched this new version of Emma, I couldn't help myself watch it all over again and again for the past week. The last part of this final episode was so emotional. Great job for all the cast have done indeed!

Hi Bilbo, has YouTube uploaded the final ep there? Cos I know ep 2 and 3... in YouTube, and you're in USA. No way you can watch BBC from there?

hi guys, missed me? I have started work again... *sobs*

I've seen 2 of 3 eps and I really enjoyed so far. Can't wait to see the final ep soon. Then I will have to rewatch them all. :P

Hugs and kisses from Maria in Sweden