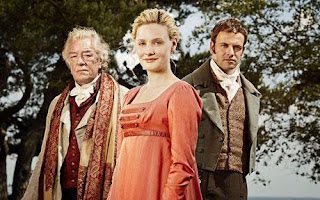 I have been away this week, hence my late review of Emma which was aired in the UK last sunday evening. It was the first of four 1 hour episodes which will be shown weekly to fit in nicely with the very cold autumnal nights we, here in the UK, are now facing! There is nothing better than to snuggle up on the sofa with a hot drink and watch a Jane Austen adaptation.
I was actually down in Devon, staying in a cabin, so the ambience was just fitting!


I knew from the start that I liked Romola Garai as an actress so I had high expectations. She did not disappoint in my opinion. She plays the strong, independent character that we all know and love with such confidence. She has this interesting way of using her eyes to convey extra expression; I remember thinking a similar thing about James McAvoy in Becoming Jane.

Michael Gambon as Mr Woodhouse was exactly the calibre we would expect from him and he depicted Emma's father so effortlessly. This is despite his admission this week in the press that he has never even read the Jane Austen novel 'Emma' before playing this character!

Tamsin Greig is another name to mention; she plays the character of Miss Bates so brilliantly in my opinion.

Linda did draw my attention to a review posted by Roland on Pemberley which began with a point that I myself would have made. The opening sequence of episode 1 was very Dickensian in nature; it showed the primary years of Emma, Frank Churchill and Jane Fairfax before Frank and Jane leave Highbury and Emma stays. It was a very very effective opening.

This particular Pemberley review then shifts to a more disappointed opinion, some of which I have to agree with. To take a line from the review:

"When I first read the book Emma's realisation that she loves Mr Knightley was just as much of a shock to me as it was to Emma. In this adaptation the moment you saw Mr Knightley (LEANING on the wall?! Oh please) you know that she and he are the love story here. This doesnt seem right to me."

This is very true and I completely agree. This very point has been a gripe of mine about a number of adaptations over the years; it leaves nothing to the imagination of the audiences. And especially with the story of Emma, it is particularly disappointing.

Another review which was posted by Allison Pearson in the Daily Mail on Wednesday slated the producers of this adaptation by saying:

"the script has this 18th century heroine nattering away in the chatty, informal tones of a twenties flapper."

I think this may be overly critical but she has made a good point. In trying to make this production more contemporary, perhaps some of the Austen has been lost.

I have to say that even after these negative comments, I still am a great believer in this adaptations. So many younger people of this generation have no insight into literature and would not even know who Jane Austen was if you asked them. It may have been a mistake to make this version of Emma slightly more contemporary for us Austen lovers but if it intices at least one young person to pick up a copy of Emma and learn more about Jane's work then it has to be worth it! Do you not agree? 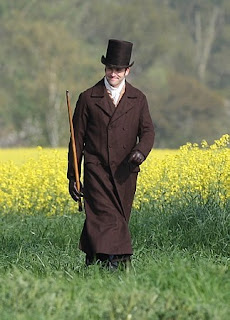 On a final point, I know how much Linda and Icha adore Richard Armitage so I will not say anything to offend, except that Jonny Lee Miller doesnt fail in demonstrating sensibility and charm as Knightley.
I welcome all opinions as I know everyone will have their own, very different, perceptions.

Such a complete review, Rachel dear, thanks a lot! It`s a very nice day in Quebec, and I wish I could hide under my duvet tonite and watch the second part of Emma with hot coco, alas it shall not happen.

Will you do us the honour of posting your comments for the next ep (2), my dearest, thanks a lot!