Jane Austen Quote of the Week 76 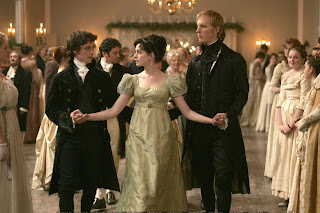 I had the idea for the quotes this week when I was watching two Jane Austen movies in only a few days apart. The first one was Persuasion 2007 (sigh… Captain Wentworth…), and the second one was Pride & Prejudice 2005. It was Charlotte Lucas’ comment that she was already seven and twenty, and hence it was best for her to take the offer of marriage from Mr. Collins (ick! Yuck!). But then, it dawned on me. Hey… Anne Elliot was 27 as well at the beginning of Persuasion story. That’s no coincidence in Jane Austen’s world.

Then I remembered about another ‘27’ event that was experienced by Jane Austen herself. Jane Austen (born 16 December 1775) was almost 27 years old when she visited Manydown in 1802 and was asked for a hand in marriage on 2 December evening by Mr. Harris Bigg-Wither. Our heroine accepted it, and then turned it down the very next morning. She lived up to her belief that she would not marry, unless it was for love.

Was that why Miss Austen inserted that magic number of 27 into her novels? Let’s see four of her novels that I know have a character of this age in them.

"Perhaps," said Elinor, "thirty-five and seventeen had better not have anything to do with matrimony together. But if there should by any chance happen to be a woman who is single at seven-and-twenty, I should not think Colonel Brandon's being thirty-five any objection to his marrying her ." “A woman of seven-and-twenty,” said Marianne, after pausing a moment, “can never hope to feel or inspire affection again; and if her home be uncomfortable, or her fortune small, I can suppose that she might bring herself to submit to the offices of a nurse, for the sake of the provision and security of a wife. In his marrying such a woman, therefore, there would be nothing unsuitable. It would be a compact of convenience, and the world would be satisfied. In my eyes it would be no marriage at all, but that would be nothing. To me it would seem only a commercial exchange, in which each wished to be benefited at the expense of the other.”

Mr. Collins, to be sure, was neither sensible nor agreeable; his society was irksome, and his attachment to her must be imaginary. But still he would be her husband. Without thinking highly either of men or matrimony, marriage had always been her object; it was the only provision for well-educated young women of small fortune, and however uncertain of giving happiness, must be their pleasantest preservative from want. This preservative she had now obtained; and at the age of twenty-seven, without having ever been handsome, she felt all the good luck of it.

"Mr. Elton is a very pretty young man, to be sure, and a very good young man, and I have a great regard for him. But if you want to shew him any attention, my dear, ask him to come and dine with us some day. That will be a much better thing. I dare say Mr. Knightley will be so kind as to meet him." "With a great deal of pleasure, sir, at any time," said Mr. Knightley, laughing, "and I agree with you entirely, that it will be a much better thing. Invite him to dinner, Emma, and help him to the best of the fish and the chicken, but leave him to chuse his own wife. Depend upon it, a man of six or seven-and-twenty can take care of himself."

They knew not each other’s opinion, either its constancy or its change, on the one leading point of Anne’s conduct, for the subject was never alluded to; but Anne, at seven-and-twenty, thought very differently from what she had been made to think at nineteen.

Persuasion Chapter 17
Twelve years had changed Anne from the blooming, silent, unformed girl of fifteen, to the elegant little woman of seven-and-twenty, with every beauty excepting bloom, and with manners as consciously right as they were invariably gentle;


When I place the novels chronologically, I see that there is a progression of maturity in either Jane Austen’s opinion of a woman/man of twenty seven, or that Jane herself cleverly progressed the understanding that even though a person (a woman, most likely) was already 27 years old, she/he could still take care of herself. That she/he does not lose her/his beauty as she/he grows older. Nay, the beauty merely transforms, progresses into another form of beauty. Whether love will come at last like Anne Elliot, or this person shall bypass that altogether (like Jane herself), that’s another matter entirely.

I guess the bottom-line is, it is not easy to live up to your own words… but Jane Austen certainly was persistent, committed and stubborn enough to do that! Way to go, Jane!

If your library has it, see also John Halperin’s Jane Austen: bicentenary essays (1975) for these ‘seven and twenty’ ideas (p. 222-223). I found the Persuasion and Pride & Prejudice idea from the movies, but I have to credit Halperin (and Google Book!) for feeding me with the Sense & Sensibility and Emma quotes. My library has the book in another town, so it will take me a few days to have it sent to where I stay now. But seems Halperin might have the same idea as well.

Pic: Think of Mr. Wisley as Mr. Harris Bigg-Wither... I might like Wisley better after all, but Tom Lefroy was much better!

Labels: Emma, Persuasion, Pride and Prejudice, Quote of the Week, Sense and Sensibility

Captain Wentworth is quite swoonworthy in the book and in the 2007 version of Persuasion.