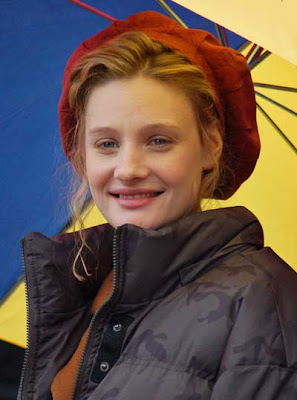 Last November we blogged about rumours that the BBC were producing a mini-series of Emma for 2009. I am embarrassed to admit that I forgot about this project (yes, I know! my fave. Austen, too) but after googling Austen during the week, discovered that Emma 2009 is currently filming!

Jodhi May as Mrs Weston

Thanks to AustenBlog for the head's up: here are some set photos: Emma Filming in Kent

So ... opinions?? It's a pretty 'young and sexy' lineup, I think. I'm a bit deflated by Garai as Emma to tell the truth, for I don't really like her as an actress, but I think she was marvelous in Atonement. Johnny Lee Miller? Couldn't believe it at first, but I am very curious. I love Michael Gambon. Not too hot on the look. The hair scares me. But still, more Austen to look forward too! (Should I say now that Beckinsale's Emma is my favourite?) 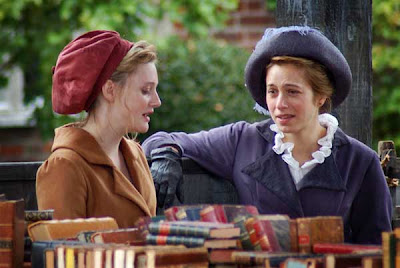 Pic 2: Romola Garai and Jodhi May as Mrs Weston from: Pemberley

You're kidding! NO Richard Armitage?! Disappointment!!!

But I LOVE Romola Garai, so sorry to disagree (yet again) with you Michelle darling, but I love her in Amazing Grace, she was wonderful as Mrs. Wilberforce. And she was amazing in Atonement (with James McAvoy) and the older Inside I'm Dancing (also with JMA). Romola is a naturally witty girl, so I'm sure she can pull a great Emma!

Wow, Gambon. He's great in Amazing Grace too, though don't really like him in Harry Potter...

Not sure about the old Edmund Bertram tho, but Ms. Cole was amazing as Caroline Bingley in LIA, so I am looking forward to it.

Well Icha, at least we got Frederick from NS to look forward to. But No Richard is sad! I had looked forward to him as Knightley. Ah well, I'll keep on drooling in front of Robin Hood for now. At least Mr Elton is not so slimy but quite similar in looks as Alan Cummings. As for Romola... well, I liked her in Atonement as in Dirty Dancing - Havanna nights and well in everything I've seen her in... Not seen Inside I'm dancing yet.

Really looking forward to seeing this!

You might be interested to know that Jeffry (known in the family as Langlois) Lefroy, my 42 year old brother and gt gt gt grandson of Tom Lefroy, is working on this as an extra!

Edward, hi! Long time no chat, mate! Hope everything is alright with you and family!

Really... very interesting that your brother Jeffry is one of the extras. Pray tell, what is (was) he in the extra, so that I can try to spot him later on? ^_^