Gosh! This is just in from an Administrator at the C19 Message Board: 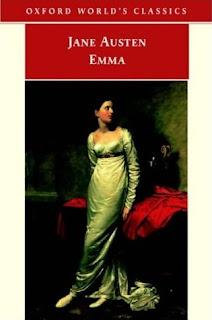 I have heard from a very reliable source that Sandy Welch is just finishing writing a 4 part adaptation of Emma for the BBC! It should be shooting in April to be transmitted on the Beeb next September/October. No news on casting or the director yet but............Yay!!
An Emma Scoop!
you will have to register to access the C19 link, and I highly recommend the board - it's fantastic!)
So ... what do you think? I hope it's true. I adore A&E's Emma but the novel is long overdue for mini-series treatment. I wonder if the other three novels (Mansfield Park, Persuasion, & Northanger Abbey) will be remade by BBC in the next couple of years? I hope so!
And ... if the rumours of Emma 2009 is true - who would you cast?
Icha is presently somewhere in the Southern Hemisphere suffering 'such tremblings, such flutterings' after surfacing to say: "Richard Armitage for Mr. Knightley!" 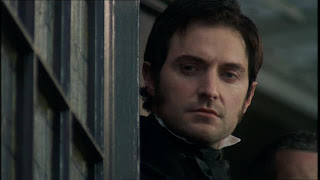 I would love to see Armitage as Knightley. (!!!!) He could be the new Firth. (Hmm, and if so, would it launch him in Hollywood, as P&P did for Firth??) If they do remake Emma, it has to be GREAT.

Last year Icha and I were discussing which Austen hero Armitage would play in an ideal world and we both agreed Knightley. If only!!! Oh no ... the more I think about it, the worse it will be if he never gets to plays Knightley in his career ...

And Emma herself? I hope they cast an unknown straight out of drama school (as they did with Ruth Wilson/Jane Eyre) ... someone fresh and exciting and new ...
So, what do you think? Who would you cast, in a perfect world?

Oh yes, Armitage as the new Knightley! Oh that would be awesome! He would be so perfect! As for the rest I really have no idea.

I watched North & south on Saturday btw. Ah, Armitage is such a sight to be seen! ;)

Hugs and kisses from Maria and Peanut

Armitage as Knightley? Too perfect!!

I just might be able to tolerate Armitage for Knightley, in spite of my caring for Strong. Hee hee.

After the N&S on YouTube there was an interview with Armitage and he mentioned Colin Firth in P&P compared to his N&S role. He is a very good actor and I hope it works for him.

Sorry for the belated response, honey, I was caught up in a meeting yesterday. And CAN YOU BELEIVE IT! Just last year after our (i.e. me and Michelle's) frenzy over Richard Armitage Thornton, we were talking about how good it would be for Richard to appear in a Jane Austen adaptation. And we were like... "Hey, how about he plays Knightley? We haven't got a good Emma miniseries for a long time."

Oh, and sweetie, I believe I saw an ad in a magazine (or was that comic?) about "THE NEW BRITISH INVASION". I.e. Robin Hood, Doctor Who, the Space, and all other BBC miniseries to the US audience.

Richard Armitage is SO famous in the US because of his Sir Guy of Gisborne, and if he's to play Knightley, who knows what will happen. But Richard likes TV series better than movies... he doesn't play movies that much eh?

Oh, this is gonna be a long thread. Here's the C19 link to Richard Armitage as Knightley:
http://c19.proboards53.com/index.cgi?board=rich&action=display&thread=38431

As Michelle said, just register to C19. It's WORTH it!

We are not alone - in wanting Mr. Armitage for the new Emma!

Check out this post on AustenBlog to catch the excitement:

I can’t believe we are bringing Mr Armitage back when we were so close to recover from all that swooning :D

What’s gonna happen with our “poor hearts” if he’s indeed to play Mr Knightley and we might get the (only) chance to see him dance? Should we be prepared with a doctor’s name “just as a precaution”? LOL!!!

I noticed that Austenblog too, Linda. Amazing this Armitage-fever is!

Mariana, what do you think my feelings were when I learned that Richard and Rupert Penry-Jones (Capt Wentworth in Persuasion 2007!) played together for one episode in Spooks series 7 episode 1? Rupert's character (Adam Carter) was later killed in a car bomb, but not before he made interesting interactions with Richard's character.
http://www.richardarmitageonline.com/spooks/spooks-7-video-clips.html

See the first two videoclips, and you'll see what I meant. Thank God that both men DID NOT WEAR CRAVATS, lest I shall faint away for sure!

oh dear me, Richard AND Rupert?! You just had to give me the link, Icha? Now I cannot in any way concentrate on my work. A half naked Richard...

Ok I just fainted... ;) Even without the cravats they are both gorgeous.

LOL! What about this one, Maria?

Montages of Richard and Rupert in Spooks. Eat them, honey! They're cravat-less, but still yummy...

Or you up for a made-to-order Richard (Thornton) and Rupert (Wentworth) with cravats, Maria? Wink wink!

This one is all Richard and Rupert in Season 7 eps 1. So sad that Rupert's character (Adam Carter) died; he was so good. But I agree with the other poster, if not because of Richard joining Spooks, that series will be so hollow without Rupert.

Maria, you OWE ME a Richard-Rupert music video. With CRAVATS.

Thanks for the links dearest Icha, unfortunately there was nothing new for me as I’m checking RAO website (Annette is doing an Excellent job keeping it up to date) every other day and I’ve already seen all the new Spooks episodes uploaded on YT

I think I may know what your feelings were when you watched RA and RPJ ...they could not differ much from mine :)

Here is something to give you even more tremblings and flutterings, some happy coincidences that I’m sure you all gonna looove:

2) Rupert Penry-Jones was introduced as Adam Carter in series 3 (2004); Adam took over Tom's position as Senior Case Officer > then he played Captain Wentworth in 2007 Persuasion

3) Richard Armitage joined the cast as Lucas North in series 7 (2008); following Adam's death, Ros was made the section leader and Lucas replaced her as a Senior Case Officer > THEN ...

Ha ha!!! I couldn’t resist temptation – you know how much I love to analyse :)))

Icha--> ooh I think I just might be obliging enough to make you a video with lots and lots of cravats... I've been thinking of making one with James MacAvoy using Lillix's What I like about you... Perhaps some Rupert and Richard added to that would be just the thing... Or do you have a better music idea?

Maria, when I got inspiration for song, I will let you know. I prefer something classical though, like using The Hole in the Wall or theme from North and South, etc. But go ahead if you find something nice first.

Icha--> Since you asked for a video, you should have a video made just for you with the music you like. :) I'm making one for me with Lillix now to learn the new editing program I've gotten. LOTs and lots of cravats of course, I'm might just have to add Firth to the collection... ;)

Luckily enough I have a husband who is quite understanding about my obsessive behaviour. Too bad I cannot blame it on the pregnancy though, since it started way before... ;)

Okay then, if I can find a music suitable for that video, I shall let you know. Even send the file perhaps. Meanwhile, just finish your Lilix JMA/Firth video, and don't forget to let us know when you finish! Thanks a lot honey, and kisses for Peanut!