My Birthday Gift to Jane.

I wanted to start this by referencing Claire Tomalin's wonderful biography of Jane ('Jane Austen: A Life') which I truly adore. Any of you that have not read it should definitely put it on your christmas list!

Pasted below is a beautiful extract from chapter one which introduces our Jane to the world.
All of the photos in this post were taken by me on my trip to Hampshire.

Chapter One: 1775
The winter of 1775 was a hard one. On 11 November the naturalist Gilbert White saw that the trees around his Hampshire village of Selborne had lost almost all their leaves. "Trees begin to be naked," he wrote in his diary. Fifteen miles away, higher up in the Downs, in the village of Steventon, the rector's wi 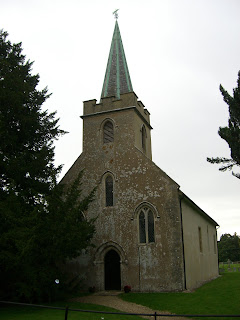 fe was expecting the birth of her seventh child from day to day as the last leaves fell. She was thirty-six and had been married for eleven years. Four sturdy little boys ran about the parsonage and the big garden at the back, with its yard and outhouses, rising to the fields and woodland beyond. The eldest, James, at ten already showed promise as a scholar, sharing his father's taste in books, and the only daughter, Cassy, kept her mother entertained with her constant chatter as she followed her round the house and out to visit the dairy and the chickens and ducks. Cassy would be three in January. Outside Mr. Austen's study the house was seldom entirely quiet.

The November days went by and the rains set in, keeping the boys indoors; by the end of the month it was dark in the house at three in the afternoon, and dinner had to be eaten very promptly if they were to do without candles. Still no baby appeared. December came, bringing an epidemic of colds and feverish complaints. There was a sharp frost, putting ice on the ponds, enough for the boys to go sliding; then, on the 16th, White noted, "Fog, sun, sweet day."
The 16th of December was the day of Jane Austen's birth. The month's delay in her arrival inspired her father to a small joke about how he and his wife had "in old age grown such bad reckoners"; he was forty-four. The child came in the evening, he said, without much warning. There was no need for a doctor; it was rare to call one for something as routine as childbirth, and the nearest, in Basingstoke, was seven miles away over bad roads. In any case, "everything was soon happily over." They were pleased to 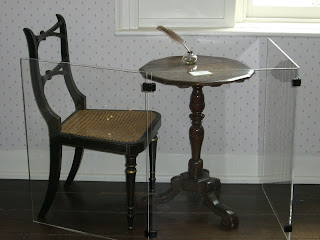 have a second daughter, "a present plaything for her sister Cassy and a future companion. She is to be Jenny." George Austen's letter went on to talk of the prospects of a ploughing match in which he was interested, Kent against Hants for a rump of beef, weather permitting. A village rector in a remote country parish was as much a real farmer as a shepherd of souls.

The baby was immediately christened at home by her father, like all the Austen children. There would be a church ceremony later. And now winter set in in earnest. Mr. Austen's ploughing match could not take place, as snow fell steadily, thickly and persistently, drifting right up to the tops of the gates. Soon the lanes were filled and almost impassable. The poultry would not stir out of the hen house, and wild birds appeared at the kitchen door for crumbs. "Rugged, Siberian weather," wrote White, remarking that the snow formed romantic and grotesque shapes as it continued to fall and then freeze. Newborn lambs were frozen to the ground, and hares came into the gardens looking for food.

Inside the parsonage, Mrs. Austen lay upstairs in the four-poster, warmly bundled under her feather-beds, the baby in her cradle beside her, while someone else-very likely her sister-in-law Philadelphia Hancock-supervised the household, all the cleaning and cooking necessary where there were many small children, together with the extra washing for the newly delivered mother. The maids stoked the fires and boiled coppers, and when she could the washerwoman made her way from the village and toiled for a day, although laundry froze before it dried and the house was full of airing sheets and baby things. Mr. Austen might read to the children after their three o'clock dinner, but boys like to run and slide up and down stairs, and there were no carpets to dull the noise. Mrs. Austen would not be expected to set foot on the floor for two weeks at least. 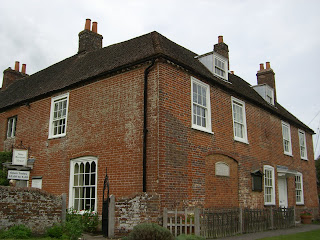 Just past dawn, the sun stands
with its heavy red head
in a black stanchion of trees,
waiting for someone to come
with his bucket
for the foamy white light,
and then a long day in the pasture.
I too spend my days grazing,
feasting on every green moment
till darkness calls,
and with the others
I walk away into the night,
swinging the little tin bell
of my name.

Rachel dearest, those are very very nice photos and a very beautiful gift! Jane will be soo happy. The bedroom is so beautiful too!

Arrrgh! I'm the ONLY one (oh, with Michelle) who hasn't given the pressie, and I shall be late for sure, for I am not returning back from the field till Monday night! So sorry Jane...!

Wow, I can't believe that blanket has been around for about 200 years!!! THANK YOU, dearest Rachel, for sharing your pictures with the rest of 'Planet Jane'

and me Icha! But I am working on it! Now that I'm on maternity leave I have some time on my hands... ;) Well, I'm supposed to get ready and rest so that I'm fit for fight when Peanut's finally decides to enter this world, but sitting in front of a computer is rest enough I think! ;)