I was endeavouring to do a christmas quote for this week. I thought that Mansfield Park was the obvious choice for this decision.

This quote is not particularly related to christmas or its festivities (it simply references it!) but I think it is wonderful prose and a real gem from our Jane; particularly the line "Varnish and gilding hide many stains".
It is taken from a letter written from Miss Crawford to Fanny;

"from what I hear, poor Mr. Bertram has a bad chance of ultimate recovery. I thought little of his illness at first. I looked upon him as the sort of person to be made a fuss with, and to make a fuss himself in any trifling disorder, and was chiefly concerned for those who had to nurse him; but now it is confidently asserted that he is really in a decline, that the symptoms are most alarming, and that part of the family, at least, are aware of it. If it be so, I am sure you must be included in t 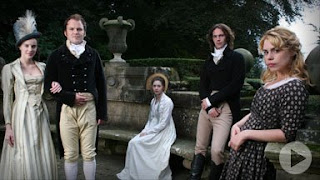 hat part, that discerning part, and therefore entreat you to let me know how far I have been rightly informed. I need not say how rejoiced I shall be to hear there has been any mistake, but the report is so prevalent that I confess I cannot help trembling. To have such a fine young man cut off in the flower of his days is most melancholy. Poor Sir Thomas will feel it dreadfully. I really am quite agitated on the subject. Fanny, Fanny, I see you smile and look cunning, but, upon my honour, I never bribed a physician in my life. Poor young man! If he is to die, there will be _two_ poor young men less in the world; and with a fearless face and bold voice would I say to any one, that wealth and consequence could fall into no hands more deserving of them. It was a foolish precipitation last Christmas, but the evil of a few days may be blotted out in part. Varnish and gilding hide many stains. It will be but the loss of the Esquire after his name. With real affection, Fanny, like mine, more might be overlooked. Write to me by return of post, judge of my anxiety, and do not trifle with it. Tell me the real truth, as you have it from the fountainhead. And now, do not trouble yourself to be ashamed of either my feelings or your own. Believe me, they are not only natural, they are philanthropic and virtuous."
Pic: Mansfield Park TV Listings

It was a foolish precipitation last Christmas, but the evil of a few days may be blotted out in part. Varnish and gilding hide many stains.

My dear God. Do you think Jane Austen was talking about her 1795 Christmas with Tom Lefroy? I always know that Mansfield Park has loads of TL references in there! Nice quote, Rachel honey!

And Merry XMas everyone!

Oh, Rachel, how very heartrending that quote is. I have this instinctive feeling that dear Jane left us some thoughts on TL and we failed to recognize them since we were unaware of the situation.

Thanks for your alertness! Love and Happy Holidays to everyone.