Jane Austen Quote of the Week: Week 34 (by Linda) 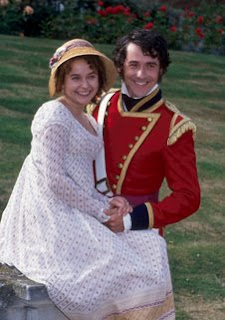 Please pardon an old Lady who is “too soon old and too late smart” for moralizing to the younger generation (I wish I had understood this message, many years ago), but just remember that Jane Austen wrote these words when she was only in her early twenties. Goodness, was she ever smart!

In this scene Elizabeth is mulling over the elopement of Wickham and Lydia.

Wickham's affection for Lydia was just what Elizabeth had expected to find it -- not equal to Lydia's for him. She had scarcely needed her present observation to be satisfied, from the reason of things, that their elopement had been brought on by the strength of her love rather than by his; and she would have wondered why, without violently caring for her, he chose to elope with her at all, had she not felt certain that his flight was rendered necessary by distress of circumstances; and if that were the case, he was not the young man to resist an opportunity of having a companion.

It seems that Elizabeth was smart enough to figure out that Wickham’s reason for eloping was the “distress of circumstances” and “an opportunity of having a companion”. NOT TRUE LOVE.

The moral of the story is: Be very careful to know a woman’s/man’s character before committing your future happiness, companionship, fortunes, and children to that person.

The Big Questions are: “What should we know? What are you looking for? What do you want in a mate?”

My old maid French Professor gave the class some impromptu marriage advice in college one day thusly: Choose your equal in the area of finance, religion, and intellect.

At the time, some 48 years ago, I didn’t take her too seriously, but my experiences since then have made me come to realize just how true her words are.

I can’t help but wonder what else Jane has to teach us?