~This is the first of two parts of Bilbo’s birthday presents for dearest Jane Austen. Part two will be posted shortly. Thanks a lot, Bilbo!~ 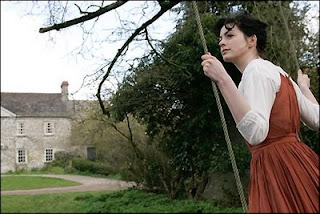 Here are two items I would like to submit in commemoration of Jane Austen’s birthday.

The first item is a review of the script of our favorite movie, Becoming Jane, apparently written in April 2006 by "Miss Schuster-Slatt" (aka Diana Birchall, author of Mrs Darcy’s Dilemma). I found the review posted at http://server4.moody.cx/index.php?id=697. While this review was written before the movie was produced, and her later review of the actual movie was less positive, I find my own experience of the movie in much greater agreement with this:

I have been meaning to post here because I read Kevin Hood’s screenplay Becoming Jane a year or so ago, and wanted to report on it as there has been so much speculation about the script, but needed to find time to reread it first. I should explain that I am a writer (author of Mrs Darcy’s Dilemma, a best-selling P & P sequel) who works as a story analyst at a major Hollywood studio, and was sent the script by a friend. These things get around, and because of my lifelong interest in Austen I have actually been sent no fewer than four screenplays about the life of Jane Austen in the past couple of years! Yes, really. And Kevin Hood’s was by far, unquestionably, hands down, the best. He is apparently an accomplished English playwright, and his skill and confidence show in the sheer structural economy with which he introduces the large cast of Austen family characters and manipulates them in a natural and unforced way, with charm and humor. I had to admire it; it was one of the few screenplays I’ve read in years where I actually thought I couldn’t do better myself, despite my knowledge stemming from thirty years’ immersion in the subject. I don’t mean to sound arrogant here: I don’t write plays or screenplays myself, just books, and my job is actually reading novels for the studio, but hundreds of thousands of screenplays are circulated in this town, and the vast majority are ill conceived and written. So to “do better” than most of them is not difficult, and in fact the other Austen scripts were better than most of them, too. But Hood’s is something more than that. He is what Jane Austen would call a reading man, but also possesses a light touch. The other Austen screenplays are by reading people but without the dexterity, or have the light touch but are not by reading people! Kevin Hood’s drama is not a literal, factual, faithful, plodding replication of precise events in Jane Austen’s life, and if you’re going to read (or see) it constantly exclaiming, “But that never happened! Jane Austen never had a neighbor anything like Lady Catherine! (That’s your Lady Gresham.) Henry Austen never behaved like that in London! If that character is supposed to be Blackall she never met him that early in her life!” then it’s possible that prejudice might prevent you from enjoying it. Justifiable prejudice, indeed, for no one doubts that we Janeites approach these things with our critical antennae very suspiciously extended; but this is a charming story and deserves an open mind. And I can at least explode one misconception that seems to have been assiduously spread by the project’s most ignorant, uninformed man who ever dared to be a press agent (whom I don’t think actually read the script): it does not make it appear that Jane Austen up and decided to become A Novelist because she was disappointed in Tom Lefroy! The script presents her as already a dedicated writer, already singular, already unfond of the marriage market and the idea of being a poor animal, before she meets him! (I can hear the collective sigh of relief.) Yes, it is a love story, in which she has a romance with Tom Lefroy and is disappointed. It takes touches from Mr Darcy and elsewhere and attributes them to Lefroy’s character, a ploy which must be fictional. The poverty of the Austens is played up and surely JA’s parents never pressured her to marry as these do. There are quibbles, but all is accomplished with such panache and confidence that the script finally wins us over. There is invention galore: Eliza is more involved in the Lefroy matter than she could really have been (but why not bring her in); and there are scenes such as a sneaking-away to Astley’s and a meeting with Ann Radcliffe that are purely imaginary, but fun. The prominence in the plot of Judge Langlois, some changed names, the presence of Jane Austen at a bloody birth, an aborted elopement – yes, considerable invention. This is fiction, but plausible fiction, done in a consistent manner, with an internal truth all its own. Most of all, Hood’s achievement is that the contingencies of the plot actually make you feel. How rare is that in a screenplay! I confess that I, jaded I, actually shed a tear, which happens perhaps twice a decade. A very effective script and I will defend it. I will further venture to say that if it is not screwed up in the production (which could easily happen…I am not an Anne Hathaway fan, but then I also wanted to beat Keira Knightley about the head with her own torn off shin bone, to paraphrase Mark Twain), judging by the screenplay alone, this has at least a good chance of being a charming, moving, enjoyable film.


I thought about omitting the last sentence from the review, with which I am in total disagreement, but decided that intellectual honesty requires its inclusion. I am a fan of Anne Hathaway, as well as of Keira Knightley, and I believe that Becoming Jane as produced amply fulfilled the review's expectations. As a further bit of intellectual honesty, I will admit there is a strongly negative review posted at http://server4.moody.cx/index.php?id=727 by the poster of the above review; while that severely prejudiced review screams for a rebuttal, this would not be the appropriate occasion for it.