I am delighted to post on Linda's behalf her beautiful birthday letter to Jane Austen. Thank you Linda! And a happy early birthday to Jane, in the buildup to our celebration of her life. 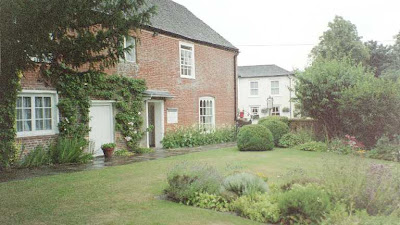 To commemorate your 233rd Birthday, it would be fitting to take a trip down Memory Lane. Here are a few highlights of the discoveries and events during those amazing years that will astound you beyond your wildest dreams.

First, on the Home Front, here are some similarities from your time to mine. I can still remember from my childhood in the 1940s seeing my Mother washing our clothes outside in a wash tub using a scrub board. The clothes were then hung out to dry using clothespins on a clothes line. We also had a wood stove, and I had the chore of bringing wood into the house from the wood pile.

It was in the 1950s that ‘modern’ life took hold and we came out of the dark ages, as it were. At that time we got an electric washing machine, clothes dryer and stove which Hil would have really enjoyed! We also did some starching and ironing, but with the introduction of permanent press materials we no longer have much ironing to do. Before we got an electric refrigerator, I remember we had a real ice box, though you probably did not have one of those. I am sure, without a doubt, you wish to ask for a definition of ‘electricity’ which is beyond my limited knowledge to describe for you. My ancestors, the most notable of whom was a doctor, came from England around 1800, and by living in an isolated, rural part of the southern United States would explain why our life was much the same as yours for well over a hundred years. The people and language were very similar. That would account for me feeling so at home and like a kindred spirit while reading your books.

In the field of personal communications, we progressed from our mail being delivered to the West by the pony express, books and newspapers, to include the telephone, telegraph, radios, cell phones, the internet and email. We can now communicate instantly with our friends, literally, around the globe. Who would have believed it?

Our little corner of the world has kept up with the rest of the world in the area of transportation. We shed the horse drawn carriages for automobiles, trains, and airplanes. Every time I see an airplane in the sky, I think of you and what your reaction might be to see such a sight flying through the air. The most important event was the trip into space when men actually walked on the moon, if you can believe that! It sounds unreal even to me, and I was there watching it happen on television at the time.

For entertainment, we still have stage plays and have added moving pictures and television as well as a myriad of electronic games. If only you could see what they have done with your novels, you would be truly amazed.

Ladies fashions have changed, but I won’t say for the better, completely. I personally prefer the more Ladylike styles of your time than ours. You would be quite shocked, I am sure, were you to step into our era.

It would be fascinating to see your expression if you only knew how much money you have generated through these 200 years, especially if you had the benefit of collecting a commission from the sale of your books, movie adaptations, collectibles, etc. How rich you would be!

The condition and status of women has continued to improve also. We have more freedom, independence and the ability to work at a profession if we so wish. In some areas though, you would probably think there is a bit too much freedom, and I think you may be correct.

There is one area that has not changed at all, I am sorry to say, and that is in politics as can be noted in the following quotes which reflect our own troubled economic times.

“The arrogance of officialdom should be tempered and controlled, and assistance to foreign hands should be curtailed, lest Rome fall."

And in your own time Catharine Macaulay had this to say:

“…The pernicious policy… of borrowing money of the public, and settling certain taxes to pay the interest of the borrowed sum, had introduced a new kind of traffic… which was totally unknown to happier times. When a nation is deeply in debt, public credit is ever precarious; and the rise and fall of stocks furnish an opportunity for needy adventurers to prey on the hopes and the fears of individuals, whilst the growing necessities of the state give rise to a variety of inventions for raising the sums adequate to the exigencies of the occasion. This worst kind of gaming made a rapid progress… and at length the spirit of adventure, and the eager desire of becoming suddenly rich by the successful attempts of a few of the favored sons of fortune, infected all ranks and all conditions of men through the whole society…

…It was now generally asserted, that every man had his price: the few instances which the times exhibited of self-denial, on the principles of honor and patriotism, were regarded as the effects of an enthusiastic lunacy; the electors paid no regard to their privileges, but as it enabled them to make a lucrative gain of their votes; the elected made the best market of their purchased seats; and opposition was now carried on without other motive than the bringing obscure men into notice, and enhancing the price of corruption: and yet… if ever the people of this country had reason to be in a more particular manner watchful of their political security and their national welfare, it was undoubtedly at this period…”

The History of England from the Revolution to the Present Time (1778); Letter V by Catharine Macaulay.

Lastly, I must say that the highlight of my life was in 2003 when I had the good fortune to attend the Chawton Conference and opening ceremonies for the Chawton House Library in your brother Edward’s home. It was such a memorable moment to visit the Cottage in Chawton and stand in your very room and look out of your own window. What a thrill for this American who had traveled across an ocean for the first time in her life to get there. I wrote an article about my trip which can be found HERE and it will give you some idea of the events of that lovely, unforgettable visit.

It would do your heart good to know how much you are loved and admired as an authoress. Your novels are indeed timeless, and are favorably compared to the Great Shakespeare. Your fame has spread around the world, and your novels have been translated into other languages. You have given us a treasure! Please accept our heartfelt Thank you on your Special Day!

Oh, thank you so much Michelle for posting it, and deep gratitude to Linda for the poignant letter! What a great kick-start for our JA birthday gifts and wishes!

Who's next? Remember, ANYONE is entitled to give Jane our love!

Thank you so so so much Linda. This letter is very personal and I thank you so much for sharing it with us all.