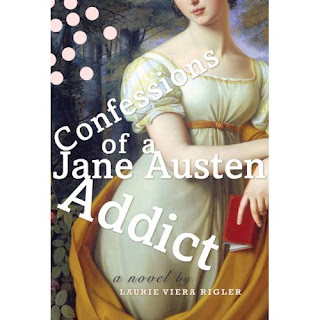 Laurie Viera Rigler, author of 'Confessions of a Jane Austen Addict', has written a nice review of her viewing of Becoming Jane. Here's the link, and here's the copy and paste. Thanks a lot, Laurie!

I keep thinking about “Becoming Jane,” which I saw last night at a special screening for JASNA-Southwest. Sure, it took liberties with chronology and no doubt fashioned characters and events out of pure imagination. Sure, it may not be everyone’s idea of who Jane Austen was or what she would have done. But who cares? Who could possibly claim to know who Jane Austen really was? Not the most scrupulous biographer, not the most accomplished Austen scholar, not the family members who wrote about her, not we who read her surviving letters and her six great novels and her juvenilia.

Even if we possessed every letter she wrote—and it is well known that Jane’s beloved sister Cassandra Austen made sure that would not happen (though A.S. Byatt’s Possession is still my fondest Janeite fantasy)—we would still have only those snapshots of her life. We can only guess at who the author is, who any author is, by reading her letters and reading her books and stories. I always smile when I read and hear heated debates as to who of Jane Austen’s heroines most closely resembles Miss Austen herself. How about all of them? Is not each of us a myriad of identities and concepts of ourselves, from what we think we are to what various people around us conjecture? Would each of our friends and relations provide the same description of our character, or even our appearance? So yes, “Becoming Jane” is fiction based on fact. Once one is comfortable with that notion, one can truly sit back and enjoy this lovely film. It's a compelling story with stellar performances by all.

For me, the most enchanting thing about it was seeing how the filmmakers portrayed the process of creation, how we would hear the words rushing through Jane Austen’s head, flowing out of her pen, considered, rejected, crossed out, and replaced with something even more brilliant; and yes, how the people around her spouted lines from her books, because that is what writers do, they listen and store away and then use whatever they see, hear, smell, taste, and touch. It also gave me a lot to think about in terms of why authors might choose, as a service to themselves and their readers, to give their protagonists happy endings.

For me the most gratifying thing about this film was seeing Jane Austen portrayed as a passionate, independent, empowered, and sexually awakened women who made staggeringly courageous choices in her life, including the choice to be a novelist and the choice not to marry. This is a refreshing change from the caricature of the sweet-tempered virgin writing fluffy romances, an image that was born with the “Memoir” of Jane Austen written by her nephew, James Edward Austen-Leigh (see Emily Auerbach’s excellent book, Searching for Jane Austen, for a fascinating analysis of our misconceptions about Jane Austen).

The only thing I didn’t appreciate was the closing line written on the screen, which stated that neither Jane nor her sister Cassandra ever married. That seemed unnecessary (and perhaps unintentionaly sexist) after the previous lines, which stated that Austen wrote six of the greatest novels in the English language; and that Tom Lefroy became Chief Justice of Ireland. I think the filmmakers should have left it at that.