Jocelyn Guest of the New York Magazine has this very interesting article about Becoming Jane on July 17, 2007. This is the copy-and-paste content. 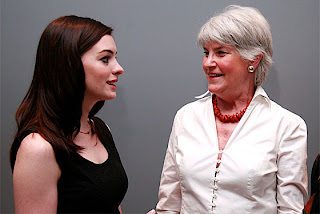 Last night's Tribeca panel on Becoming Jane, the Jane Austen biopic coming out in August, resembled a twittering Austen book club more than it did your typical post-screening Q&A. The crowd of Austen fans, mostly women of a certain age in awe of the movie, didn't shy from shouting things out at star Anne Hathaway and her fellow panelists (including Masterpiece Theatre's Rebecca Eaton). Trays of white wine circulated; we think a few audience members might have had more than their fair share.

Hathaway hammed it up for the Austen lovers. When asked about her experience with Austen's novels, she responded, "When I was in college at Vassar, unsuccessfully pursuing an English major…" At which point a lady in the crowd asked, "So what was his name?"

"At Vassar," Hathaway smoothly answered, "the better question is what was her name." The crowd, who might as well have been wearing Vassar sweatshirts, laughed hysterically. 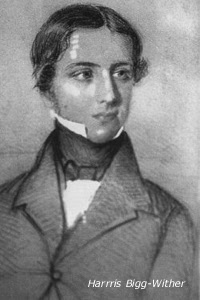 But after Austen's near-canonization in the literary firmament, was she really just a Regency-era Carrie Bradshaw? She even had a fling with a Mr. Big(g-Wither)! Eaton acknowledged the resemblance, while staking out Austen's claim to a certain un-HBO refinement. "People are saying Jane Austen's attraction is like Sex and the City. I like to think of it as Extensive Hand-Holding in the Country." —Jocelyn Guest

Thank you Jocelyn, a very nice article. By the by, I was planning to put Harris Bigg-Wither on the spot a few days ago. I think the time is coming up, especially due to the importance of Manydown Park (where Jane did dance with Tom) and the resemblance of Mr. Bigg-Wither with Mr. Wisley in Becoming Jane. Just give me a few days...

The name of the manor was Manydown Park and is never referred to as Manydown House.

Thank you Blair. I've fixed the text and link accordingly. I've also taken the liberty to place a link to your site in our 'Austenian link'.