Upon glancing at the first impression of this site, a friend of mine asked if I could also insert synopsis of Jane Austen's books, for she knew little of them. I think this is a good idea; ergo I shall start with Austen's most famous book: Pride and Prejudice. Possible similarities with Tom Lefroy and Jane Austen herself are also explored.

Opening with one of the most famous lines of English literature ('It is a truth universally acknowledged, that a single man in possession of a good fortune, must be in want of a wife.'), Austen originally drafted Pride and Prejudice as First Impression. PP was first published on 28 January 1813, Austen's second book after Sense and Sensibility (1811).


Synopsis: Charles Bingley, a very rich and eligible bachelor from London, had just rented Netherfield in the village where Elizabeth and her family lived. Mr. Bingley was then introduced to the Bennet sisters, and danced with the eldest (Jane) in a country dance event. Bingley and Jane developed a mutual attraction and everyone seemed to find the couple very agreeable - with the exception of Mr. Darcy who was not convinced of Jane's affection towards Bingley. Hence, Darcy persuaded Bingley to leave the Netherfield (and Jane) and return to London, leaving the poor girl broken hearted. Once Elizabeth knew that Darcy had been behind her sister's sorrow, she was so naturally angry at Darcy. Unbeknown to Elizabeth, Darcy had begun to develop fond attachment to her, and expressed his utter and ardent love to her as she was about to reprimand him of his very meddlesome behaviour. And of course, our heroine refused Darcy's romantic exclamation, leaving him hurt and fury. But later on, Elizabeth's feeling towards Darcy took an unexpected turn when he explained everything in a letter (including his cold relationship with a George Wickham, friend of the Bennet family) and helped to fix a certain Lydia problem from destroying the Bennet's reputations. Of course, in the end, our hero and heroine admitted their mutual affections to each other... but the whole ups and downs were very well explored. Further explorations of the plots are available in Wikipedia. 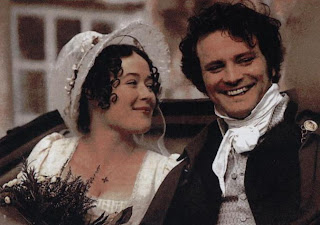 Possible similarities:
Fitzwilliam Darcy - a bit of Tom Lefroy in his initial reluctance to blend with Hampshire

Elizabeth Bennet - Jane Austen in her free-spirited manners and love of books, also her prejudice that Tom was 'the most disagreeable, insolent, arrogant, imprudent, insufferable, impertinent of men'.

However, Jon Spence speculated that Jane did not see herself as Lizzy but she did see Tom Lefroy that way. According to Spence, Jane had previously meddled with gender- Eliza de Feuillide had been the inspiration for Edward Stanley in Catherine (Austen's unpublished juvenilia).