A short but charming review of Becoming Jane in Thread, NZ 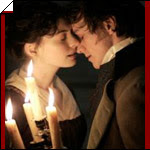 
'Becoming Jane', starring the extremely watchable Anne Hathaway and Tom Lefroy, is a love story of the true romance that shaped Jane Austen's life and work.

The encounter with the handsome Irishman when Austen was twenty never developed and she never married, instead writing works of ideal romance bound by the culture and mores of the day. And so it was for Austen herself; unable to go further with her affair- with parents who want her to marry for money in a class-obsessed England of 1795 and duty to his family.

I found myself getting caught up in the tale and, despite knowing the real life ending- like watching Titanic and hoping it doesn't sink and Romeo and Juliet don't pick up the knife- egging for Tom and Jane to get together.

The actors, Anne Hathaway and James McAvoy, names that would themselves perfectly suit an Austen novel, ignite passion in the chaste love scenes they share, with a real screen chemistry not seen in recent historic romance (see Zellweger and McGregor in Mrs Potter.)

For all lovers of Austen, and lovers of romance, Becoming Jane is a delicate telling of star-crossed lovers destined to fall yet doomed to fail. A little over-long but beautifully played, Becoming Jane captures the sense and sensibility of the time and tale.