Tom Lefroy Quote of the Week 28

Although this is not strictly a "Tom" quote, this one is especially for Mariana who is researching the Tom/Jane love affair. I was stumbling around (as I do a lot lately) my web site and in the Table of Contents I saw this note to a link under "Jane Austen - The person": Was Jane Austen ever in love? No one knows, but see Jane Austen's Eleventh Letter . I was literally 'blown away' when I read the article. I recommend reading the entire article, but here is a tidbit - the first 2 paragraphs:


I wish to discuss a letter written by Jane Austen to her sister Cassandra on November 17 of 1798. This is the eleventh letter in the most recent edition of Jane Austen's letters published by Deirdre Le Faye (1997) and the tenth in the first collection of her letters published by her grand-nephew (Lord Brabourne, 1884). The latter reference is available on line at the Brabourne Collection. You won't need that link in this particular case, because I reproduce the entire letter for you at the end of this posting.

Let me begin with an observation: If Goethe himself or even if one of the Russians had written this letter for a fictional character, he would have been very proud of himself—and for good reason. I find the letter to be very interesting and very affecting and I suspect that you will as well. Several biographers point to the most important passages in the letter, the ones dealing with her meeting with Madame Lefroy, but I want to do something more. I will discuss those in the context of other passages in the letter because only in that way can the full impact be felt.

The article was written by my late friend, Ashton Dennis for his web site "Male Voices in Praise of Jane Austen". I do believe he has "given us a treasure". See what you think about it. 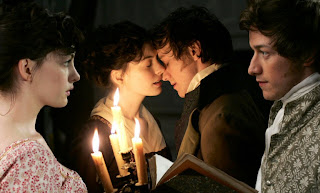