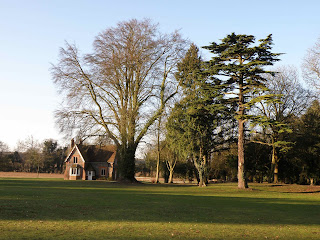 We made a post a month ago (view here) which proposed that the new portrait found and owned by Dr Paula Bryne is actually Jane Austen.


I have received a detailed email from Chris Brindle who is related to the portrait painter and topographical recorder of the Hampshire scene, R.H.C. Ubsdell (1812-1887). I am going to present the information below.
The 'unseen' portrait is thought to have been created from life in London around 1816 by an artist of moderate abilities. Although it is acknowledged that Paula may be correct in her assumptions, given that the work of art is this old, there must leave some room for conjecture, so Chris would like to offer another possibility. The documentary made the point that the picture fits Anna Lefroy’s description exactly, so he believes it could be exactly that, a picture produced to the recollection of Anna, most probably in 1833.

Chris has actually seen Anna Lefroy’s diary and this places Anna at a house in the grounds of Oakley Hall (see 1st picture above) for a period from 1831 until 1833 and again for a period between 1840 and 1849.

As we know Anna Lefroy was the first child of eldest Austen son, James, by his first wife Anne Matthew. On her mother’s early death, when Anna was two she spent a lot of her early life at Steventon with Aunt Jane. Anna went on to marry Ben the youngest of the Leforys of Ashe. Ben did not take holy orders initially and it seems probable that Ben claimed he could make a living as an artist, and Anna claimed she would make a living as a writer like Aunt Jane. Jane had written her play 'Sir Charles Grandison' as an entertainment for Anna, they had talked about the characters of Pride & Prejudice as if they were real people, and on the brink of married life with Ben Lefroy, Anna embarked on her first attempt at writing 'Which is The Heroine' which was ultimately to be thrown on the fire in frustration sometime in the early 1820s. It is Jane's letters giving her comments on this attempt which tell us so much about Jane's own attitude to writing.

Anna’s house in the grounds of Oakley Hall was most probably the Garden Cottage of the present hotel, and it was here Chris believes that Anna finally plucked up the courage to become a writer like her Aunt Jane. Her short story 'Mary Hamilton' was published in the Literary Review of 1833, the same year Austen's novels came back into print in the Bentley Standard Editions. Anna had to vacate Oakley Hall on the death of its owner Wither Bramston in 1833, and Chris postulates that it had been Wither who had supported Anna in her writing to the displeasure of Wither’s wife Mary, sister of William Chute of the Vyne. William and his wife Eliza had strong connections with the Austens; James (Anna's husband) had hunted with the Vine Pack and Anna’s half brother James Edward Austen (Leigh) married Eliza’s niece.

Is it possible that Anna had an artist produce the image of Jane Austen from her recollections with a view to 1) making a link with Jane Austen, 2) justify women as professional writers, 3) illustrate the forthcoming Bentley editions, 4) reestablish favour with the family of William Chute?

Upon her return to her house in the grounds of Oakley Hall in 1840, Anna again found the ability to write. 'The Winter's Tale' was published in 1841 and 'Springtide' in 1842. Most importantly, it was here in 1845 that she wrote her continuation of Austen's last and unfinished novel Sanditon having received the manuscript following Cassandra’s death early that year. Her continuation was finally published in America in 1983. Finally in 1845 Anna found courage to be recorded as a writer, shown sitting at her writing desk in R.H.C. Ubsdell's tiny portrait miniature of her completed in the October of that year. This pose has remarkable similarities with the ‘unseen portrait of Jane’.

Chris Brindle believes that it was Ubsdell who produced the 1833 picture because he knew of Anna’s struggle as a writer. Ubsdell was known to have sketched Anna back in 1833 because he included her in his picture, “Sermon at St Lawrence” (see 2nd picture below). In this allegorical work Ubsdell uses the images of the famous people he has painted, to create a scene of peopl 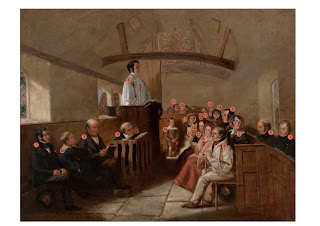 e sitting round the smallest church in the country listening to a sermon by Samuel Wilberforce. Ubsdell portrays his patron Charles Richard Sumner Bishop of Winchester as a shepherd leaning on his shepherd’s crook, whilst Anna holds her hand on his as if seeking his guidance.

In his early years Ubsdell had an art gallery and studio at 135 High Street Portsmouth, England, opposite the theatre. He became very successful with the advent of photography and in 1859 moved to possibly the best house in Portsmouth, 1 Green Row. He became the local artist of choice for the rich and famous passing through Portsmouth. Portraits of Sir Francis Austen and Charles Austen are also probably by him. It is likely Ubsdell was selected for the retrospective Jane Austen picture in 1833 because in that year he had exhibited at the Royal Academy for the first time.
There could also be other Ubsdell pictures of the Austen family. The miniature painting of Sir Charles Austen (done surely in England in 1846 rather than Malta in 1850) at Chawton Cottage is remarkably similar in size, shape and style to the Anna Lefroy miniature, and the admiral in 'The Royal Navy No 2' aquatint in the National Maritime Museum based on an Ubsdell watercolour, bears a remarkable similarity to the Francis Austen portrait, plate 5 in Southam's 'Jane Austen & The Navy'.


What do you think? I have been reliably informed that he “unseen” picture of Jane Austen, owned by Paula Byrne, which featured in the recent documentary, is to go on exhibition at Chawton Cottage at Easter for a period of six months so any of you able to make a visit, I think it will be well worth it to make your own judgement.

If anyone would like to contact Chris Brindle for more information, his email address is brindlechris@aol.com. He does have a key to who everyone is in the “Sermon at St Lawrence”, and a note of other picture references to the people involved. He also has information about the likely materials used for the portrait.

Pics: Sent to me by Chris Brindle

This is intriguing, indeed, but I would have liked to see that Ubsdell's tiny portrait of Anna Lefroy for comparison with the "unseen portrait", also getting a plausible explanation for the inclusion of Westminster - St Margaret (and a tiny part of Westminster Bridge – look closely ) in the portrait, if it was based on Anna's recollection of her aunt in 1833.