Jane Austen Quote of the Week - Week 97 by Linda

Team Jane has kindly agreed to allow me to post a series from Emma as I am now reading through it. I thought it may be fun to see how many ‘gems’ we can find. I am overwhelmed already and I have hardly begun. It was necessary to read our previous posts to make sure I didn’t repeat any, so please bear with me as I begin our journey. For this series I will start in Chapter 4 where we find Emma and Harriet discussing Mr. Martin and Emma says: 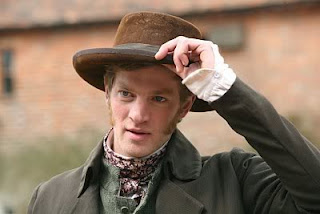 "Only four-and-twenty. That is too young to settle. His mother is perfectly right not to be in a hurry. They seem very comfortable as they are, and if she were to take any pains to marry him, she would probably repent it. Six years hence, if he could meet with a good sort of young woman in the same rank as his own, with a little money, it might be very desirable."

"Well, and that is as early as most men can afford to marry, who are not born to an independence. Mr. Martin, I imagine, has his fortune entirely to make -- cannot be at all beforehand with the world. Whatever money he might come into when his father died, whatever his share of the family property, it is, I dare say, all afloat, all employed in his stock, and so forth; and though, with diligence and good luck, he may be rich in time, it is next to impossible that he should have realised any thing yet."


What I find interesting about the conversation is the attention to the details of being able to afford being married, because when I was at that stage, money was hardly discussed. It was all about ‘being in love’. The one thing I do remember is my Mother asking me when I announced my engagement is this: “Can he support you?” And quite frankly, it had not crossed my mind. I think we had only worked out the immediate details as to where to live, but there was no discussion about the long term.

The only other memory I have about this subject is when I was in college, my ‘old maid’ French professor said, “Marry someone who is your equal in education, religion, and financial status.” Since she was older and still unmarried, I paid little heed to her advice. Now I wish I had paid attention. She has a point, though some inequality may be tolerated, it should be noticed.

The paragraphs before and after the quote above go into quite a bit about the conventions of that day concerning the ‘mixing’ of the social classes. It seems that we can find a lesson or two on every page.

Pic: Jefferson Hall as Robert Martin in Emma 2009, from Photobucket

"Well, and that is as early as most men can afford to marry, who are not born to an independence.

Well, I'd have to take my proverbial hat off for Jane Austen here. I do agree that even now, 30 years old is a wise minimum age for marriage, for he has to finish school and earn some money first. Not to mention some extra maturity... And that applies for women, too!