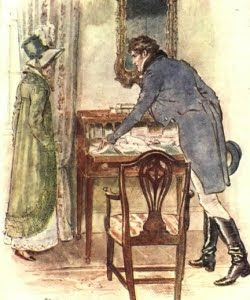 In Week 43 I chose a quote from Chapter 23 of Persuasion in which Anne and Captain Harville are having a discussion on the differences between the male and female heart. I took it from the point where Captain Wentworth walked in the room but I realised that we haven't referenced the exchange before this moment which is equally as interesting and beautiful. Anne and Capt. Harville are actually discussing the shattered Captain Benwick who loved Captain Harville's deceased sister, Fanny, very deeply.

"True," said Anne, "very true; I did not recollect; but what shall we say now, Captain Harville? If the change be not from outward circumstances, it must be from within; it must be nature, man's nature, which has done the business for Captain Benwick."

“No, no, it is not man's nature. I will not allow it to be more man's nature than woman's to be inconstant and forget those they do love, or have loved. I believe the reverse. I believe in a true analogy between our bodily frames and our mental; and that as our bodies are the strongest, so are our feelings; capable of bearing most rough usage, and riding out the heaviest weather."

"Your feelings may be the strongest," replied Anne, "but the same spirit of analogy will authorise me to assert that ours are the most tender. Man is more robust than woman, but he is not longer lived; which exactly explains my view of the nature of their attachments. Nay, it would be too hard upon you, if it were otherwise. You have difficulties, and privations, and dangers enough to struggle with. You are always labouring and toiling, exposed to every risk and hardship. Your home, country, friends, all quitted. Neither time, nor health, nor life, to be called your own. It would be hard, indeed" (with a faltering voice), "if woman's feelings were to be added to all this."


This is just true mastery and is openly dealing with the issue of gender differences which is a common theme in many of Jane's novels. Anne is so confident in her view and so eloquent in her delivery....she really puts him in his place. I would love to know what you all think of this part of the novel."

"You are always labouring and toiling, exposed to every risk and hardship. Your home, country, friends, all quitted. Neither time, nor health, nor life, to be called your own. It would be hard, indeed" (with a faltering voice), "if woman's feelings were to be added to all this."

Thanks a lot for the thoughts, Rachel.

Persuasion is my favorite out of all Jane's books.
I love this scene because it sets up how Frederick realizes Anne may still love him. With her declaration in these words start the long desired happy ending for true love.

This scene is one of the great conversations in literature exploring and comparing the depth of men's and women's feelings of love and loss.
There is no question of anyone putting anyone down. Anne & Captain Harville are both speaking from their own sense of loss, but recognize the validity of the other side. Captain Harville was certainly not the least offended by Anne's words; indeed, immediately after the words quoted by Icha he says:
"...I am in very good anchorage here," (smiling at Anne) "well supplied and want for nothing..."
Anne for her part soon gives full credit to men's feelings:
"Oh!" cried Anne eagerly, "I hope I do justice to all that is felt by you, and by those who resemble you. God forbid that I should undervalue the warm and faithful feelings of any of my fellow-creatures. I should deserve utter contempt if I dared to suppose that true attachment and constancy were known only by woman...All I claim for my own sex (it is not a very enviable one, you need not covet it) is that of loving longest, when existence of when hope is gone."
Captain Harville's response to this? - "You are a good soul," cried Captain Harville, putting his hand on her arm quite affectionately. "There is no quarreling with you..."
I am sure it was those last words by Anne that completely pierced Captain Wentworth's hitherto bitter heart.