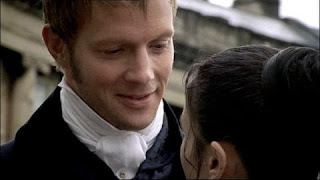 This week's quote is again from Persuasion (I promise to get another book next time...), for it just suddenly clicked with me when I opened the book. I took it from Oxford World's Classics version 2003, p. 148 (Chapter 20, or Volume II Chapter VIII). This is when Anne Elliot conversed with Capt. Wentworth about Capt. Benwick's new attachment (and engagement) to Louisa Musgrove. Wentworth was still rather surprised at their engagement and said,

'I confess that I do think there is a disparity, too great a disparity, and in a point no less essential than mind. I regard Louisa Musgrove as a very amiable, sweet-tempered girl, and not deficient in understanding, but Benwick is something more. He is a clever man, a reading man; and I confess, that I do consider his attaching himself to her with some surprise. Had it been the effect of gratitude, had he learnt to love her, because he believed her to be preferring him, it would have been another thing. But I have no reason to suppose it so. It seems, on the contrary, to have been a perfectly spontaneous, untaught feeling on his side, and this surprises me. A man like him, in his situation! with a heart pierced, wounded, almost broken! Fanny Harville was a very superior creature, and his attachment to her was indeed attachment. A man does not recover from such a devotion of the heart to such a woman. He ought not; he does not.'

Oh.... what can I say...? The passage brought me to Persuasion 2007 when Rupert Penry-Jones as Wentworth uttered those words as he clenched his jaws in determination... sigh... And Wentworth might actually want to say that in his own circumstances, he would not be able to forget such a woman in his life, namely Anne herself.

PS: I just realised that this quote actually resonates well with Rachel's last week. In Rachel's choice of quote, it was Anne who claimed that a woman loves the most. Now in this week's quote, Capt. Wentworth was the one who said that a man could not, should not forget the love of his life. In the end, I think both were correct.

nice. One of favorite paragraphs in Persuasions.

(references to Tom Lefroy perhaps? Maybe reverse order , Janes having him speak what she felt in regards to tom lefroy.)

Becoming Jane is on BBC One and BBC HD tonight:

Thanks a lot Anon! Rachel also just told me about it when we talked over the phone (I finally talked to Rachel over the ph! Yay!). Have fun watching!

Some screenshots from BBC premiere of Becoming Jane:

And there will be DVD for region 2 available.