This week I have been a little cheeky. In the comments section of Jane Austen Quote- Week31, Linda, our dear friend and fantastic librarian, brought our attention back to the wonderful The loiterer passages which are a selection of favourite passages taken from Jane's six novels. They were chosen and the page constructed by Linda and a group of fellow Janeites.


I was browsing the Sense and Sensibility passages and I came across a favourite part of the novel for me. In chapter 6, Marianne has not heard from Willoughby even though he knows that she is staying with Mrs Jennings. Marianne and Elinor attend a social gathering and Willoughby is there. This bit of the novel captures my heart every time. It sends shivers down my spine and I am with Marianne so completely as a woman and almost as her friend. I think that the readers feel her pain. In the Ang Lee adaptation (1995), I think that this scene is captured so perfectly by Kate Winslet (playing Marianne) and it made me feel like I wanted to jump in to the scene myself and get some answers from Willoughby for treating her this way.

"But have you not received my notes?' cried Marianne in the wildest anxiety. 'Here is some mistake, I am sure--some dreadful mistake. What can be the meaning of it? Tell me, Willoughby; for Heaven's sake tell me; what is the matter? 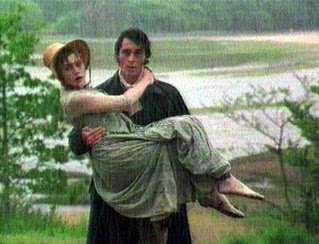 He made no reply: his complexion changed, and all his embarrassment returned; but as if, on catching the eye of the young lady with whom he had been previously talking, he felt the necessity of instant exertion, he recovered himself again, and after saying, 'Yes, I had the pleasure of receiving the information of your arrival in town, which you were so good as to send me,' turned hastily away with a slight bow, and joined his friend.


Marianne, now looking dreadfully white, and unable to stand, sunk into her chair; and Elinor, expecting every moment to see her faint, tried to screen her from the observation of others, while reviving her with lavender water.


Go to him, Elinor,' she cried, as soon as she could speak, 'and force him to come to me. Tell him I must see him again--must speak to him instantly.--I cannot rest--I shall not have a moment's peace till this is explained--some dreadful misapprehension or other.--Oh, go to him this moment."


Doesnt this last line from Marianne to her sister Elinor tug at the heart. She is trying to be strong but inside she is melting and her heart is aching.

Thanks Linda for bringing my attention back to this.

Labels: Austen's books, Quote of the Week, Sense and Sensibility

Excellent quote, my dear... and I think the passage shews Marianne's broken heart well. Poor girl... Though I have to say that I still like Kate Winslet's portrayal as Marianne more (1995) than 2008's Charity Wakefield (who still played an excellent Marianne), but it's just me...