Quote of the Week 26 by Linda

I have this favorite from Persuasion, Chapter 18. Anne’s emotions have run amok after she reads the letter from Mary concerning the engagement of Louisa and Benwick. She realizes that her very own Captain Wentworth is a free man.

Mary need not have feared her sister's being in any degree prepared for the news. She had 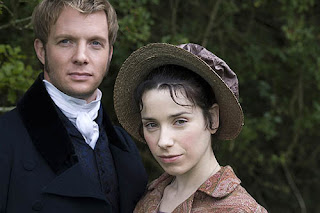 never in her life been more astonished. Captain Benwick and Louisa Musgrove! It was almost too wonderful for belief, and it was with the greatest effort that she could remain in the room, preserve an air of calmness, and answer the common questions of the moment. Happily for her, they were not many. Sir Walter wanted to know whether the Crofts travelled with four horses, and whether they were likely to be situated in such a part of Bath as it might suit Miss Elliot and himself to visit in; but had little curiosity beyond.

Did you catch that phrase: “with greatest effort”? It never ceases to amaze me how dear Jane can express our most intimate emotions without all the “explicitness”. I am sure that most of us have felt such passions though under different circumstances at some time in our lives, and can in that way relate to them. I hardly think that unless she, herself, knew of such feelings that she would have been able to write about them.

I just don’t think a person can simply pull it out of the air. Brava, Jane!

I love that quote! the subtleness of the emotions JA displays is wonderful and I get so excited just reading this quote. Just thinking of how bewildered I would have been in Anne's shoes.

Hugs and kisses from Maria and Peanut

I would faint right at the spot if I were Anne. Or at least, would do an Emma Thompson gargling as Edward Ferrars proposed her, LOL!

But indeed, it was such a lovely quote, Linda dear. Thanks so much!

I agree - whoever was the object of her great passion, be it Tom Lefroy or someone else, I'd like to think she experienced these feelings.

Ok so tomorrow at 1 pm swedish time I become Mrs Arell. I'm freakishly nervous despite the fact that we will only be five people present. Gaah! ;) I'm still able to fit into the dress, thank God!

Hugs and Kisses from Maria and Peanut

Congratulations and I wish you all the Best, Maria. Have a Lovely Day!

Love from Linda the Librarian

Eeekkk!!! Mrs. Arell! Sorry for the late response, but really, congratulations! And I do hope you two will lead an excellently happy life!