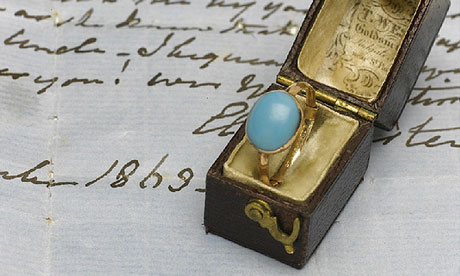 Sorry it has taken us a while to write this information but a ring belonging to Jane Austen sold for £152,450 at a Sotheby's auction in London on July 10th, this was over five times the predicted price!

An article from the guardian newspaper states "The turquoise and gold ring came to Sotheby's from Austen's family, complete with a note sent by Jane's sister-in-law, Eleanor Austen, in November 1863, to Jane's niece, Caroline Austen. "My dear Caroline," wrote Eleanor. "The enclosed ring once belonged to your Aunt Jane. It was given to me by your Aunt Cassandra as soon as she knew that I was engaged to your uncle. I bequeath it to you. God bless you!""

There has been speculation that the ring was given to her by Tom Lefroy but experts predict that she actually received it from her brother Henry who she was very close to.

I wish we know who bought the ring... It will be a good thing to know. Hopefully the JA Regency World Magazine Sept/Oct will have more info. Rachel, perhaps you want to hold a hard copy of that magazine?