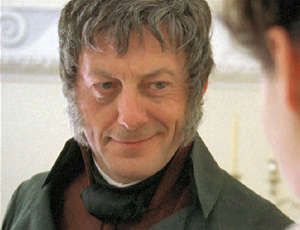 I want to share with you a part of a post I made 9 years ago about General Tilney from Northanger Abbey. It is a good example of Jane’s ability to portray human character. I collected bits and pieces to make up my portrait of him as follows:

Because I have known one, I noticed his behavior throughout the book and concluded that he was manic-depressive to some degree with a touch of obsessive compulsive disorder. He needed a good dose of lithium among other things.

What I noticed about him is in the following list which describes the General in Jane's own words (italicized) with my comments in brackets:

* seemed always a check upon his children's spirits [you are not allowed to do anything]
* his angry impatience at the waiters [and everybody else]
* strictest punctuality to the family hours would be expected... [dominates every aspect of your life]
* anxious entreaty to hurry her dressing time [he is not to be inconvenienced]
* Miss Tilney gently hinted her fear of being late [always fear of a blow up and/or a lecture from 1 to 4 hours]
* for General Tilney was pacing the drawing-room, his watch in his hand, and having, on the very instant of their entering, pulled the bell with violence, ordered "Dinner to be on the table directly!" [always has to voice his displeasure]
* He [G. Tilney] turned away and Catherine was shocked to find how much her spirits were relieved by the separation. [There are several instances where "relief" is expressed upon separation.]
* His son and daughter's observations were of a different kind. They had seldom seen him eat so heartily at any table but his own, and never before known him so little disconcerted by the melted butter's being oiled. [and a million other minor infractions/trivialities]
* Eleanor's forced performance in dismissing Catherine [someone else always has to do the "dirty" work]
* Eleanor's request that Catherine write to her under cover to Alice [you have to "live" behind his back]

Each item taken separately does not a crisis make, but when all these instances manifest in one person you have a manic-depressive also suffering with obsessive compulsive disorder. No one could make up such behavior! Jane had to have witnessed it but had not idea that it was a mental disorder. I have felt the fear, terror, embarrassment, relief, and it definitely was not funny to me. I do remember my Father and Brother came to visit once and noticed my behavior in anticipation of a blow up from my "general". They thought I was hilarious. Just for a few seconds I visualized the scene from their point of view and it was funny. But from my perspective it was not.

You may read my entire post HERE. My experience is another good reason to heed James’ advice to Catherine in my other quote from Northanger Abbey to “beware how you give your heart”.

Hi! Linda, I like your article very much:) and your vision of this character also. Thank you! So when I was reading 'Northanger Abbey' and watching screen version 2007, I had some kind of perception that General Tilney is John Willoughby after his unfortunate mercenary marriage many many years later...