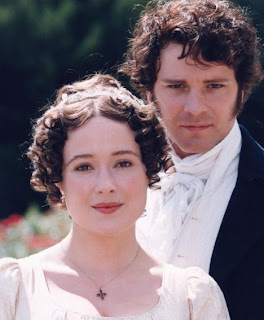 I was reading Pride & Prejudice this week and I re-discovered a quote that I have always adored. It's Jane at her best - yet again. Post-Pemberley discussions:

Mrs. Gardiner and Elizabeth talked of all that had occurred, during their visit, as they returned, except what had particularly interested them both. The looks and behaviour of every body they had seen were discussed, except of the person who had mostly engaged their attention. They talked of his sister, his friends, his house, his fruit, of every thing but himself; yet Elizabeth was longing to know what Mrs. Gardiner thought of him, and Mrs. Gardiner would have been highly gratified by her niece's beginning the subject.

They talked 'of all that had occurred ... except what had particularly interested them both'. To me, this seems so fundamentally human - or female, at least. I can just see Lizzy, dying to discuss him - yet everything is so new, and there's all this shyness and vulnerability and self-consciousness about the specialness of it all ... that to initate a conversation about him is just too much. Wonderful Jane. In few words she layers so much.

Michelle, thanks a lot for the great quotes! Indeed, it's a genuine human feeling to talk of something very important, but for whatever reasons, both (or all) parties chose to evade the very question/topic of the hour. And we can feel it, can't we? It's... nagging, sometimes.

Thanks again, and great pix!