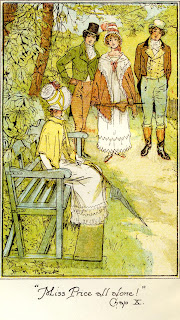 This week's quote is from Mansfield Park – Chapter 9:

Miss Crawford has just learned that Edmund is to be a clergyman, and in the midst of their discussion she says, “A clergyman is nothing.”

Edmund states the importance [in bold] of the clergy in his reply:

“The nothing of conversation has its gradations, I hope, as well as the never. A clergyman cannot be high in state or fashion. He must not head mobs, or set the ton in dress. But I cannot call that situation[being a clergyman] nothing which has the charge of all that is of the first importance to mankind, individually or collectively considered, temporally and eternally, which has the guardianship of religion and morals, and consequently of the manners which result from their influence. No one here can call the office nothing. If the man who holds it is so, it is by the neglect of his duty, by foregoing its just importance, and stepping out of his place to appear what he ought not to appear.”

Edmund goes on to explain the influences to be expected from the clergy, thusly:

“…And with regard to their influencing public manners, Miss Crawford must not misunderstand me, or suppose I mean to call them the arbiters of good–breeding, the regulators of refinement and courtesy, the masters of the ceremonies of life. The manners I speak of might rather be called conduct, perhaps, the result of good principles; the effect, in short, of those doctrines which it is their duty to teach and recommend; and it will, I believe, be everywhere found, that as the clergy are, or are not what they ought to be, so are the rest of the nation.”

Now we know what is wrong with the world and who to blame for it. Well, Jane said it, I didn’t. Oh, not really though, God takes the blame according to Isaiah 45:7 where He says, “I form the light, and create darkness: I make peace, and create evil: I the Lord do all these things.” There are those who discount this by saying He wouldn’t do that, but He can create good and evil since He also has the power to restore all things which makes Him Fair and Just.

This is just one example that I have found where Jane has included her religious beliefs that I would like to have the time to collect. I think we may be surprised at what we could find. End of Today’s Sermon.

Pic: An old but classical illustration of Mansfield Park, from only a novel