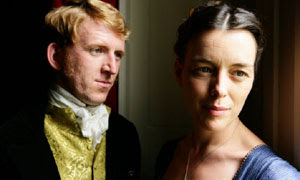 This is a reminder for all the regular UK visitors to the blog:
Miss Austen Regrets is finally being aired this Sunday 27th April on BBC 1 at 8pm.

Taken from the official site, "Based on the life and letters of Jane Austen, the BBC One feature-length drama Miss Austen Regrets tells the story of the novelist’s final years, examining why, despite setting the standard for romantic fiction, she died having never married or met her own Mr Darcy."
It is written by Gwyneth Hughes (heavy influenced by Janes surviving letters to her sister Cassandra) and stars Olivia Williams and Hugh Bonneville, among a very vastly talented cast.
It was aired earlier in the year in the US and received many positive reviews. I particularly liked a review by the Los Angeles Times: 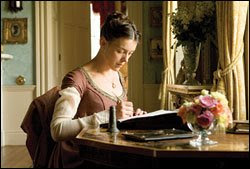 “Williams… gives us a person capable of writing those novels, of imagining all the good and bad within them. This is a complicated Jane, mischievous, loving, sad.”

I am very excited about seeing this as I have been intrigued for a long time now. We are all interested to hear your opinions of the production.

Rachel dearest, you HAVE to do the first-hand reporting! I SO want to see it myself, but I haven't ordered the DVD (SS 2008 and MAR together) due to budget constrains. Pray, tell us what you think soon?

Yes Rachel! You must review!

Meanwhile, did anyone see this? *shifty eyes*