It Must Have Been

In loving memory of Nadia Radovici who wrote the amazing ‘A Youthful Love: Jane Austen and Tom Lefroy?’, I’m very honoured to present you a beautiful piece of writing from Veronica Nahmias, Nadia's own daughter. Veronica contacted us a few weeks ago; her email arrived on time, as Kari had scheduled her trip to Holland a few months back anyway. Afterwards, following a very healthy uproar inside the Team Jane, Kari went to to meet Veronica. There are many interesting stories from Kari’s and Veronica’s meeting; I will let Kari herself write about it. Meanwhile, please enjoy ‘It Must Have Been’, written by Veronica Nahmias, dedicated to her mother, Nadia Radovici. Thank you, Veronica, for trusting us. And friends, don’t forget to ask your friends to sign, sign and sign the Radovici Petition. We need your help to have the book reprinted in the near future.

It Must Have Been 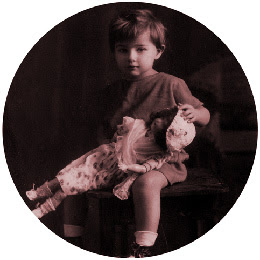 It must have been snowing when my mother was born.

It was the end of November in . In a house in the old city center. People in long fur coats hurried through the streets. The sound of horse drawn carriages was softened by the falling snow.

Her parents led busy lives and didn’t care much about babies. A wet-nurse fed and took care of my mother. Nurse-maids and the inevitable German nannies followed. And when she was a little older she was, as a matter of course, sent off to a boarding school.

Luckily, her grandparents were very loving and often welcomed her to stay with them.

Grandpa took her for walks and bought her sweets and coloured balloons. Grandma woke her up and cuddled her every morning. Then they would drink tea together, Russian tea, sweetened with a spoonful of jam.

Grandpa and grandma lived in an apartment overlooking the busiest shopping street in .

In summer, when the windows were open, noises from the street below would fill the rooms. The call of vendors selling their wares, barrel organ and gypsy music, the occasional honk of a car.

In winter the double windows were closed tight and my mother would press her nose against the window panes to look at the people coming out of a theatre nearby.

Horse drawn sleighs glided past and the roast chestnut vendor on the street corner stamped his feet and rubbed his hands to keep warm.

‘What else did you see?’ I always asked, when my mother stood up to do something else. ‘What did Grandma look like? What did she wear? And was she a good cook? What did you usually have for dinner?’ My mother would smile. Then she would sit down again and continue her story. I was enchanted by her descriptions.

This is how I most remember her. As the loving, storytelling mother, who often read to me, who talked to me and who encouraged me to know as much as possible about the world. Who accompanied and protected me during our many wanderings.

The colour of a winter evening in . Byzantine churches with snow covered domes and the sound of bells tinkling on horse-sleighs. The late 1920’s ... How many people still remember how they were?

The girl who once sat looking out of Grandma’s window with her elbows on a cushion is gone.

She has taken everything with her: her love of life, her curiosity and her enthusiasm. But also her pain and disappointment with a life which was so fatefully intertwined with the politics of the century she lived in. And, above all, she has taken her memories with her, the memories she talked about so lovingly.

She not only left us, but also took a whole world with her.

What a beautiful piece of writing and a loving tribute to Veronica Mahmias's mother.
Is Veronica the same Veronica Nahmias who is a wonderful illustrator? If it is, you should take a look at her work which is stunning!

Oh, yes, that's THE Veronica Nahmias. Her works are indeed superb, eh? You two could do a lovely pairing for some... ehm... project...

What a lovely memoir! I really enjoyed reading it... and feel sad that Ms. Radovici is no longer with us. But, as we see here, she does live on . . . in an infinite number of ways but, importantly, through her daughter and -- in turn -- through us!

So true, Meg... And thanks for being with us, despite our patchy posts. I have another post to submit, but my hands are full. Hopefully, tonight or tomorrow morning.

Hi,My name's Miaomiao and I'm from China.I am crazy about Becoming Jane these days and I am really in love with it I guess.This made me want to know everything about Jane and her love story with Tom.
I have been to Cambridge.I hope I can visit Hampshire someday.
Good luck guys,forever support from me!!!

Is Becoming Jane airing in China now? Can you give us more info about it, Miaomiao? What the people think of it etc? I can put it on a new post if you send me 1-2 paragraphs to my email (tara_parvati@yahoo.com). That would be awesome!

Strange, I've been re-watching Mandarin classical TV series lately... a fan of the tales of Chinese kingdoms myself...