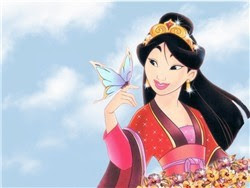 I was so glad to have Miaomiao contacting me from , delivering great news indeed that Becoming Jane receives good feedback from . Thanks to her, I've opened one of the Fansite called the Douban.com, and although I understood nothing (not surprisingly) of what the visitors talk about, I found out easily that Becoming Jane receives positive response in . Of all the total 3033 hits, 838 of them are for 5 stars (27.63%) and 1481 hits for 4 stars (48.83%), so it's a very good thing.

Now, I’ve asked Miaomiao to contribute a short summary of the Becoming Jane in , and I hope that in the near future we will have the first article about the movie’s performance in . There, Miaomiao, you can’t run away now! ^_^

Pic: the Disney version of Fa Mulan, for I think that girl resembled Jane Austen in her courage and determination!